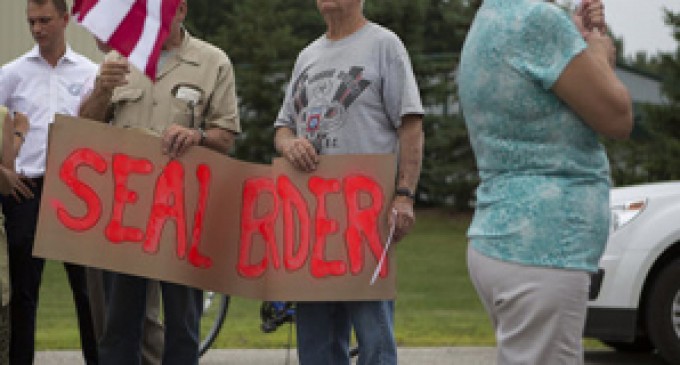 Rush Limbaugh stated on Tuesday stated that communities across the US are starting to stand to the federal assisted invasion of illegals.

William Gheen, president of the Americans for Legal Immigration PAC, is one of several groups banding Americans together to fight back. They have formed a major protest schedule for this Friday and Saturday, named the National Day of Protesting Against Immigration Reform, Amnesty & Border Surge. Find out more HERE

Gheen states, “Right now it’s looking like we’ll have a little more than 300 protest rallies large and small across the country. Our goal is to unify Americans of all races, political parties and walks of life against the Obama-inspired illegal immigrant invasion. At last count we had 257 communities signed up, but that was two hours ago. We’re expecting more than 300 and updating the event list every two hours.”

So here we have the makings of a huge clash between the federal government, who wants to move tens of thousands of illegals across the country and groups of protesters forming nationwide to fight back.

So far, as witnessed in Murrieta, California, the feds failed to take physical action against protesters, but they can´t continue to do so, there are just too many illegals to be moved under their agenda.

When the feds finally take action against citizens it could prove to be the spark that lights the revolution….of which many Americans are not only anticipating, but seeing as a necessity.

NumberUSA is publishing where the feds are planning to dump off illegals. You can find that HERE.

The protests will take place in state capitals, Mexican consulates, on highway overpasses and intersections, and at illegal immigrant drop-off points and detention centers. Look here for a state by state listing of protest locations.

Will protests of illegals by U.S. cities make a difference? Sound off in the WND Poll.

Gheen said he’s hoping to send a message to “amnesty” politicians in both parties. He wants to counteract the recent surge of illegals at the southern border with a “surge” of his own.

“We’re hoping to get an American surge that will manifest in protests and the defeat of more Eric Cantor-type Republicans that still have GOP primaries and the Democrats in November that support Obama and his amnesty plans,” Gheen told WND.

He said Sen. Lamar Alexander, R-Tenn., is tops on the list of Republicans he’d like to see booted from Washington. Alexander faces a challenge in the Aug. 7 primary from small businessman and state legislator Joe Carr, who has the backing of the tea party. He said 40 Republicans in the House also “need to go” because they are pro-amnesty politicians “playing the role” of conservatives.

“That’s why we’re involved in this historic protest, to help turn the tide in this,” he said. “That’s what they fear the most. They don’t fear people standing on an overpass swinging a flag. What they fear is when they know the next stop is the election booth and that’s our message. We want everybody to support these protests but we want them to understand we need to get them involved in these elections and the defeat of many of Obama’s amnesty allies.”

Gheen, who said he has worked as a consultant on 40 political campaigns, predicts this November will go down in history as a monumental house-cleaning in Congress.

“I am predicting that it is now possible to sweep more Democrats out of office than was done in the historic revolutions of 1994 and 2010,” he said. “We have to elect so many grassroots and populist conservatives that we can get the amnesty supporters out of office, and that includes John Boehner. Obama is doing this because he does not fear John Boehner. Republicans like Boehner and Rick Perry are not really Obama’s opponent. They just play those roles on television. They’re like people who can’t act well enough for Hollywood but they play characters on television for political purposes.”

James Neighbors, an Oklahoma City-based activist and founder of Overpasses for America, said his group will serve as the main logistics organizer on the ground in the various cities, checking on local protest laws and other details. He said it hasn’t been hard to get people excited about coming out to protest illegal immigration.

“Really we just give them the facts, and in this case it happens to be amnesty and how it’s going to cost over $60 billion to intake all of these illegal aliens and that’s only the 11 million the government admits are here. That number is from 2004,” said Neighbors. “We’re being invaded. That’s why we’re taking a strong stance on this because we’re looking and seeing more than one out of every 10 in the whole country being here illegally. That’s not even including what’s pouring across the border last several months. With the magnitude of what’s happening to America it might also be treasonous, because we believe it’s intentional.”

Neighbors said his group has demonstrated on overpasses in favor of impeachment, against Obamacare and for an investigation into the terrorist attack on the U.S. special mission in Benghazi, Libya. He thinks this weekend’s amnesty protest will be the largest of them all.

“I think it will be bigger. It’s a collaboration of several different groups and we’ve been able to get the word spread out so well on this,” he said. “People are so angry on this, it’s more tangible than impeachment. People can look around and see the results of what our open borders plan has been. I’m glad we’ll be able to provide an outlet for their anger.”

He said this weekend’s protests will be strictly peaceful.

“We don’t engage in violence, we simply exercise our First Amendment rights and educate the public with our protests,” he said. “We really look at it as a bypassing of the media. The ratings of the mainstream media are at an all-time low but you can’t ignore people out on an overpass; it sticks in your mind.”

What already has happened is clear. 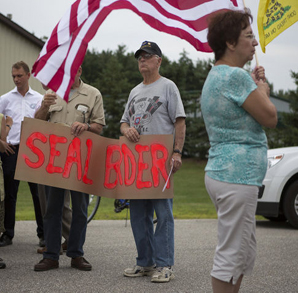