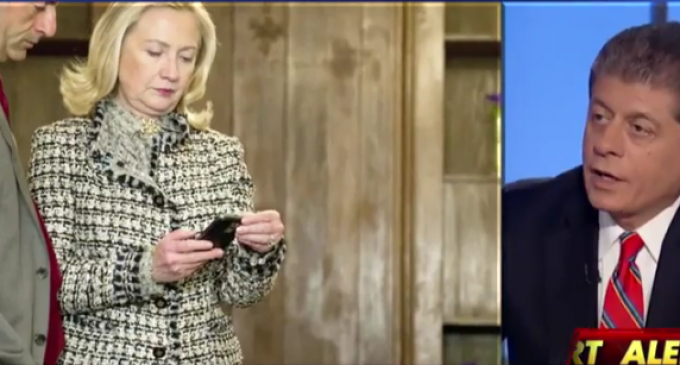 Hillary Clinton may have found herself in an unexpected, bitter primary battle against a geriatric, cartoonish socialist this election, but this week's Super Tuesday delegates are likely to all but pave the road to Hillary's eventual nomination.

How delightful, then, that they very week that hands Hillary the reins of the Democrat Party may very well be the week that leads to her downfall as a politician.

The final batch of Hillary Clinton emails are set to be released this week, and within them, 88 more classified documents have been uncovered. That's added to the hundreds that have already been released — and hundreds more than it took to convict General David Petraeus of a similar crime.

Hillary may so far have been coddled by the Loretta Lynch and those beneath her, but the overwhelming evidence against the pantsuit-clad politician that has now finally been released in its entirety may prove to be an unavoidable dilemma for even Obama's liberal Justice Department.

Judge Napolitano seems to think that if Lynch bring it to a Grand Jury, Hillary's White House prospects may soon transfer to the big house, instead.

Why? Because he's got a bombshell of an accusation. See it on the next page: