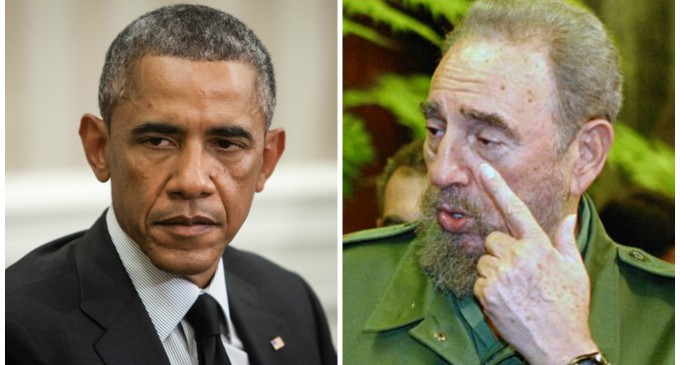 Fidel Castro is a thug, a murderer, and an unapologetic communist who has caused unbelievable suffering and poverty in his “island paradise” of Cuba. It is astonishing that he could claim success in a country that survived primarily as a welfare recipient of Russian largess for many years, and where desperation was so deep that thousands of Cubans have risked their lives to escape Cuba and reach the American shore at almost any cost.

Having said that, Castro's comments about Barack Obama after the President's recent trip to Cuba show that Obama is a weak, naive representative of the United States who is disrespected and insulted by a host of world leaders, including Russian premier Putin, Turkey president Recep Erdogan, and now Fidel Castro.

When Obama campaigned for office, he claimed he would be an excellent representative for the U.S. by sitting down with foreign leaders and reasoning together. In fact, he is now recognized as an impotent, untrustworthy hack who can't make a decision or lead a girl scout troop.  Obama did not meet with Fidel during his visit to Cuba, but after he left for Argentina to tango the night away, Fidel let him have it in the Cuban newspaper.