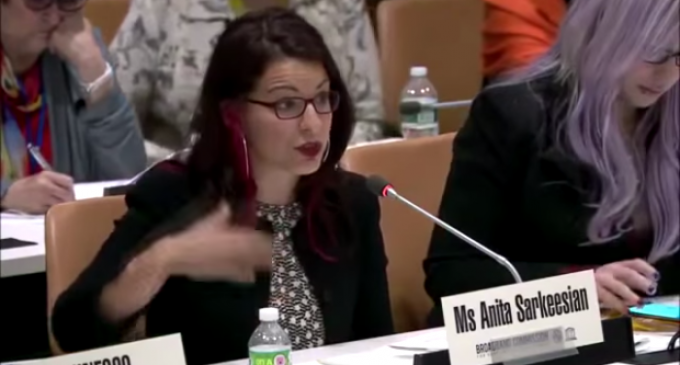 There are news stories that are so incredulous, one must actually consider them simply because they wreak of stupidity.

In this case, two self-important feminists are attempting to kowtow the UN into declaring “The end of the Internet.”

The UN is urged to censor Internet content that offends feminists or challenges their arguments. Yes, silly but true, read the details on the next page:
Telling feminists “you suck” or “you’re a liar” could be banned under the new proposals.

Feminists claim that calling Caitlyn Jenner “Bruce” should also be considered an act of “cyber violence”.

Yes, they are serious.

Ms. Anita Sarkeesian, a woman who believes EVERYTHING is sexist, racist, homophobic, speaks before the UN telling them that any minor disagreement with ANYTHING feminists want to spout must be suppressed. Her companion, “Ms” Zoe Quinn, a transgender person, believes it should be a crime to refer to a trans person by their original gender name. Thus, calling Caitlyn Jenner “Bruce” is grounds for imprisonment.

This is verifiable stuff!

Now, consider the United Nations consists of over 60% tyrannical dictatorships and fully repressive governments. The new head of the UN human rights panel is none other than Saudi Arabia. Knowing this, one would figure that 1) Ms. Sarkeesian would be whipped ten lashes for speaking out in public, according to Sharia Law. Zoe Quinn, on the other hand, would be quickly dispatched off the top of a high building.

As for the UN attempting to enforce or consider this idiotic proposal, it is dead on arrival…a phrase the two feminists should consider carefully before proposing such legislation to such a large group of fundamental Islamists.