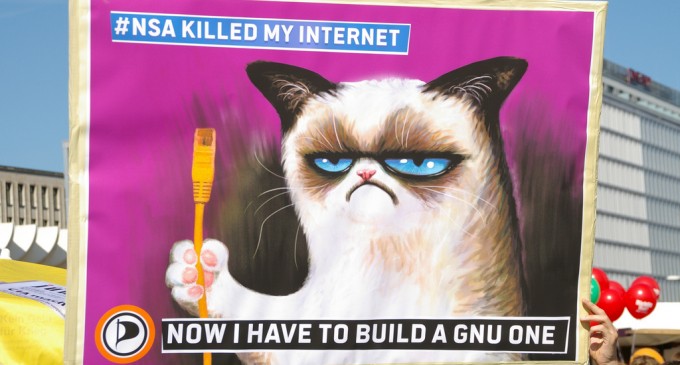 It's safe to assume that all we do on the Internet and on our computers is monitored and recorded by the NSA.

Anyone still wondering why? Anyone still thinking that “well, if I'm not doing anything wrong, it doesn't concern me”.

The NSA is tracking all our activity for the time when all hell finally breaks loose in this country. All dissenters will easily be located and their ‘transgressions' will be recorded.

Do you REALLY think they are just tracking terrorists?

This directly affects everyone. Whether you are ‘doing nothing wrong' doesn't matter. This is a violation of our constitution, and our forefathers were wise enough to know that a government that violates the precepts sent forth in the constitution will become tyrannical, which ours has.

This is not ‘theory', this is history!

It's widely known that the NSA has taps connected to the various telco networks, thanks in large part to AT&T employee Mark Klein who blew the whistle on AT&T's secret NSA room in San Francisco. What was unclear was exactly what kind of access the NSA had. Dianne Feinstein more or less admitted that they get emails via “upstream” collection methods.

As you can see in the following clip, Feinstein interrupts a discussion to read a prepared “rebuttal” to a point being made, and in doing so clearly says that the NSA can get emails via upstream collections: Upstream collection… occurs when NSA obtains internet communications, such as e-mails, from certain US companies that operate the Internet background, i.e., the companies that own and operate the domestic telecommunications lines over which internet traffic flows. She clearly means “backbone” rather than “background.”

She's discussing this in an attempt to defend the NSA's “accidental” collection of information it shouldn't have had. But that point is not that important. Instead, the important point is that she's now admitted what most people suspected, but which the administration has totally avoided admitting for many, many years since the revelations made by Mark Klein.

So, despite years of trying to deny that the NSA can collect email and other communications directly from the backbone (rather than from the internet companies themselves), Feinstein appears to have finally let the cat out of the bag, perhaps without realizing it.