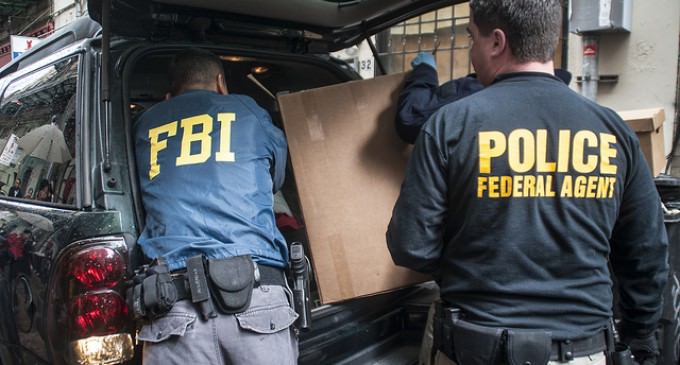 The FBI recently sent a clear message to those who might engage in political movements that work contrary to federal interests…we might raid you.

The secessionist group Republic of Texas has their own currency and small working government, which includes congress and courts.

This past February 14th at a meeting hall with interested public in attendance, the group was raided by the FBI, who took fingerprints and photos of all attendees as well as confiscated their cell phones and any type of recording equipment in their possession.

The federal government has declared that the ‘sovereign citizen' as the greatest terror threat the government faces, even moreso than jihadist groups like ISIS. One must assume that investigating a group such as this would indeed have the feds bumping into each other in the hallway.

No arrests have been made and the case is still under investigation.

“In the end, at least 20 officers corralled, searched and fingerprinted all 60 meeting attendees, before seizing all cellphones and recording equipment in a Valentine’s Day 2015 raid on the Texas separatist group.”

“We had no idea what was going on,” said John Jarnecke, president of the Republic of Texas. “We knew of nothing that would warrant such an action.”

Like the reporting you see here? Sign up for free news alerts from WND.com, America’s independent news network.

Information Liberation noted, “The pretext of the raid was that two individuals from the group had reportedly sent out ‘simulated court documents’ — summonses for a judge and a banker to appear before the Republic of Texas to discuss the matter of a foreclosure. These ‘simulated documents’ were rejected and the authorities decided to react with a ‘show of force’ – 20 officers and an extremely broad search warrant.”

The invalid court summons was signed by Susan Cammak, a Kerr County homeowner, and David Kroupa, a Republic of Texas judge from Harris County.

The search warrant against the Republic of Texas authorized the seizure of “all computers, media storage, software, cell phones and paper documents.” Kerr County Sheriff Rusty Hierholzer said the seized devices “will be downloaded and reviewed to determine if others conspired in the creation and issuance of false court documents.”

Police searched and fingerprinted each person at the meeting, but they did not perform cheek-swab DNA testing as the warrant allowed.

“You can’t just let people go around filing false documents to judges trying to make them appear in front of courts that aren’t even real courts,” Hierholzer, who led the operation, told the Houston Chronicle.

“The Republic has a lengthy list of qualms with the federal government, among them that Texas was illegally annexed in 1845,” wrote the Houston Chronicle. “But most of their complaints have to do with the behavior of the American legislature and executive. Robert Wilson, a senator in the Republic, equated politicians in Washington, D.C., to the ‘kings and emperors’ of the past, and sees Texas independence as part of a worldwide movement for local control.”

Hierholzer determined a “show of force” consisting of officers from city, county state and federal law enforcement to serve a search warrant for an alleged misdemeanor crime was appropriate due to the potential for physical resistance by the group.

The Houston Chronicle reports, “He said he had worries that some extremists in the group could become violent, citing a 1997 incident when 300 state troopers surrounded an armed Republic leader for a weeklong standoff.”

“We’ve had years of bad press, but we’re not those people,” said Jarnecke of the 1997 incident. “But yes, we are still making every attempt to get independence for Texas and we’re doing it in a lawful international manner.”

The raid has angered many people. “The tactics used went well beyond what was necessary to address a few individuals over a matter of disputed paperwork,” reported Information Liberation. “It is clear that full-blown raid was performed to intimidate and harass every member of the group. … The irony of the situation is that the thuggish tactics employed by the police and federal government actually validate the concerns of the members of the Republic of Texas and other Americans who would prefer independence from the United States federal government.”

No arrests were made, and the case is still under investigation.