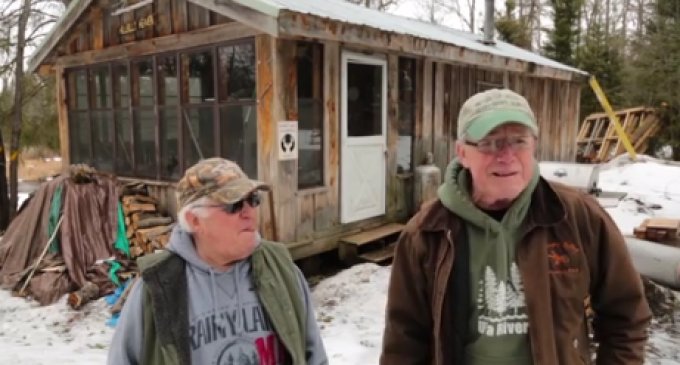 On the Upper Peninsula of Michigan in an area known as the Ottawa State Forest, a handful of families have been living there in cabins (affectionately referred to as “camps”) for generations.  Back quite a few years ago, these people known collectively as Yuppers (for U-P or Upper Peninsula dwellers) built these cabins as vacationing spots initially, but over time which became permanent homes.

The largest natural feature in the area is the Ontonagon River which flows and feeds Lake Superior.  For decades, the land in and around the river was owned by the Upper Peninsula Power Company (UPPCO) which provided hydroelectric power to a full two-thirds of the population of the UP.

Since the company had no real use for the land on either side of the river itself, UPPCO leased scattered 1-acre parcels to local residents who could not afford to buy their own property so they could build small cabins near the water, where there was good hunting, great fishing and beautiful scenery.

People built structures in all shapes and sizes, and gave them names like Bar None Lodge, Doe Haven, Altoon's Alehouse, Da Troll Camp and Fuzzy's No Road Condo.  Most were bare-bones log cabins without power or running water.  But they were solid camps that lasted for decades.

According to the report, the dams never materialized and the power company ended up selling the land back to the state.  Twenty-five years ago, the federal government showed up and showed interest in the land.  The state sold the land to the U.S. Parks Service, which then issued a notice to the camps that they would be given a grace period of 25 years to make arrangements to either move the homes or vacate them completely.

Reasons for this abandonment were not given, but it was assumed that the federal government had plans for the land.  While the news was heartbreaking for the residents of these cabins who had literally spent their lives there, raising kids and passing on these residences through the generations.

All in all, the general pervading thought about the grace period was that maybe, just maybe, in twenty-five years the federal government would forget about them and just simply leave them alone.

In March of this year, the twenty-fifth anniversary of the notice by the federal government, U.S. Parks Service rangers appeared at their doors.