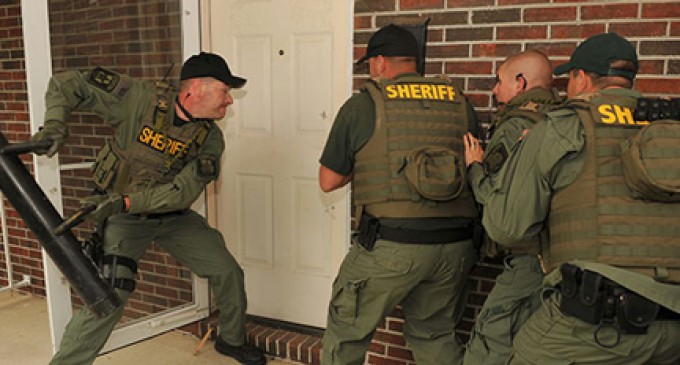 The 7th Circuit Court of Appeals just dealt an incredible blow to the Constitution: a cop can kick your door in and seize your guns if they think it's in your best interest.

The case was surrounding Krysta Sutterfield from Milwaukee, who recently visited a psychiatrist for some outpatient therapy. Sutterfield expressed a suicidal thought during the visit, seemingly tongue-in-cheek, stating “I guess I’ll go home and blow my brains out.” So her doctor to contact police.

Police ended up forcibly entering her home and seizing her guns against her will. She filed suit against the City of Milwaukee as her Second and Fourth Amendment rights were violated.

She lost, even though the court admitted her rights were violated, because the cops were ‘just trying to help.'

“At the core of the privacy protected by the Fourth Amendment is the right to be let alone in one’s home.”

But then the court states, “There is no suggestion that (police) acted for any reason other than to protect Sutterfield from harm.”

“Even if the officers did exceed constitutional boundaries,” the court document states, “they are protected by qualified immunity.”

Loss of our Constitutional rights is coming fast now!

In a unanimous decision earlier this month the Court determined that law enforcement officers are not required to present a warrant or charges before forcibly entering a person’s home, searching it, and confiscating their firearms if they believe it is in the individual’s best interests.

The landmark suit was brought before the court by Krysta Sutterfield of Milwaukee, who had recently visited a psychiatrist for outpatient therapy resulting from some bad news that she had received. According to court records Sutterfield had expressed a suicidal thought during the visit, perhaps tongue-in-cheek, when she said “I guess I’ll go home and blow my brains out.” This prompted her doctor to contact police.

For several hours the police searched for Sutterfield, speaking with neighbors and awaiting her return home. They received an update from her psychiatrist who said that Sutterfield had contacted her and advised that she was not in need of assistance and to “call off” the search, which the doctor did not agree to. Police eventually left and Sutterfield returned home, only to be visited later that evening by the lead detective on the case:

Sutterfield answered Hewitt’s knock at the front door but would not engage with her, except to state repeatedly that she had “called off” the police and to keep shutting the door on Hewitt. Sutterfield would not admit Hewitt to the residence, and during the exchange kept the outer storm door closed and locked. Unable to gain admittance to the house, Hewitt concluded that the police would have to enter it forcibly.

Sutterfield called 911 in an effort to have the officers leave; as a result of that call, the ensuing events were recorded by the emergency call center. Sutterfield can be heard on the recording telling the officers that she was fine and that she did not want anyone to enter her residence.

After informing Sutterfield of his intention to open the storm door forcibly if she did not unlock it herself, Berken yanked the door open and entered the house with the other officers to take custody of Sutterfield pursuant to the statement of detention. A brief struggle ensued.

At that point the officers conducted a protective sweep of the home. In the kitchen, officer James Floriani observed a compact disc carrying case in plain view. He picked up the soft-sided case, which was locked, and surmised from the feel and weight of its contents that there might be a firearm inside. He then forced the case open and discovered a semi-automatic  handgun inside; a yellow smiley-face sticker was affixed to the barrel of the gun, covering the muzzle. Also inside the case were concealed-carry firearm licenses from multiple jurisdictions other than Wisconsin. Elsewhere in the kitchen the officers discovered a BB gun made to realistically resemble a Glock 29 handgun.

The contents of the case were seized along with the BB gun and placed into police inventory for safekeeping.

Berken would later state that he authorized the seizure of the handgun in order to keep them out of the hands of a juvenile, should a juvenile enter the house unaccompanied by an adult while Sutterfield remained in the hospital.

Sutterfield subsequently filed a lawsuit against the City of Milwaukee with the district court, a case that was initially dismissed. She then filed an appeal with the U.S. Court of Appeals for the 7th District claiming that her Second and Fourth Amendment rights were violated.

In a 75-page opinion the court, while pointing out that the intrusion against Sutterfield was profound, sided with the city of Milwaukee:

“At the core of the privacy protected by the Fourth Amendment is the right to be let alone in one’s home.”

But the court also found, that on the other hand, “There is no suggestion that (police) acted for any reason other than to protect Sutterfield from harm.”

“Even if the officers did exceed constitutional boundaries,” the court document states, “they are protected by qualified immunity.”

As noted by Police State USA, the court may have just created a legal loophole for law enforcement officials around the country, giving them immunity from Constitutional violations if they merely suggest that exigent circumstances exist and that they are acting in the best interests of the health and safety of an alleged suspect, regardless of Constitutional requirements:

In short, Sutterfield’s privacy (which was admittedly encroached upon) was left unprotected by the Bill of Rights because of the “exigent circumstances” in which police executed an emergency detention — with no warrant, no criminal charges, and no input from the judiciary.   Similarly, the gun confiscation was also deemed as acceptable due to the so-called “emergency” which police claimed had been taking place for 9 consecutive hours.

The federal ruling affirms a legal loophole which allows targeted home invasions, warrantless searches, and gun confiscations that rest entirely in the hands of the Executive Branch. The emergency aid doctrine enables police to act without a search warrant, even if there is time to get one.  When the government wants to check on someone, his or her rights are essentially suspended until the person’s sanity has been forcibly validated.

The implications of the courts legal decision are alarmingly broad. Though this particular case involved exigent circumstances in which an individual suggested she wanted to commit suicide, albeit tongue-in-cheek, the court’s opinion suggests that such tactics can be applied for any “emergency” wherein police subjectively determine that an individual may be a danger to themselves or others.

Under new statutes passed by the federal government these emergencies and dangers could potentially include any number of scenarios. Senator Rand Paul recently highlighted that there are laws on the books that categorize a number of different activities as having the potential for terrorism, including things like purchasing bulk ammunition. Last month, when a group of concerned citizens assembled at Bundy Ranch in Nevada to protest government overreach, Senator Harry Reid dubbed them “domestic terrorists.” Even paying with cash or complaining about chemicals in water can land an American on the terror watch list.  Non-conformists who do not subscribe to the status quo can now be considered mentally insane according to psychiatrists’ Diagnostic and Statistics Manual of Mental Disorders.

Law enforcement has an almost unlimited amount of circumstances they can cite to justify threats to one’s self or others, and thus, to ignore Constitutional requirements when serving at the behest of the local, state or federal government.

Has the Federal Court’s latest decision made it possible for these vaguely defined suspicious activities to be molded into exigent circumstances that give police the right to enter homes without due process, confiscate legally owned personal belongings, and detain residents without charge?