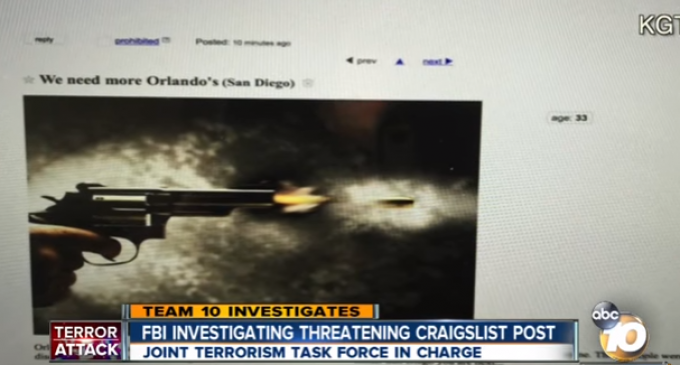 A chilling warning of a possible massacre like the one in Orlando has emerged in an unlikely place.

Nestled in the men-seeking-men section of the San Diego Craigslist page was an ad with a very different message from others on the site. Instead of describing the type of partner or relationship they were looking for, the title of the post simply read “We need more Orlando's,” a disturbingly clear reference to last Sunday's terror attack.

Ranting against the LGBT community, the poster accompanied his screed with a picture of a revolver being fired, leaving no doubt as to his intentions. He proceeded to berate what he referred to as “walking diseases, bug chasers” for giving “decent gay men and women a bad name,” and celebrated AIDS, 9/11, and the Orlando attack before ominously stating “San Diego you are next…”

Although the post was taken down, 10News forwarded a photo of it taken by a viewer to authorities, who are looking into the matter.

Read more about this disturbing post on the next page: