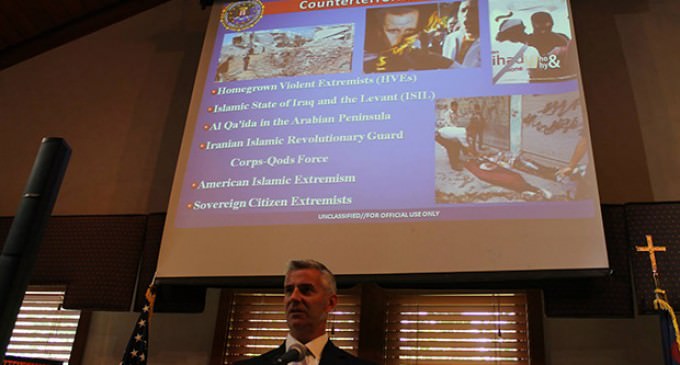 A recent FBI presentation in Georgia revealed that the FBI considers that ‘homegrown extremists' top the list as the most dangerous terrorists around, even a threat greater than ISIS, a group of psychopathic killers.

Yes, you as freedom loving people who believe that government shouldn't exert totalitarian control over people are now more dangerous than a group of murderers behead people with zeal.

Our Founding Fathers would feel they failed us somehow.

According to the business owner,the FBI agent, referred to as Special Agent Johnson, completely glossed over the looming ISIS threat to instead focus on American citizens.

Shockingly, as Agent Johnson broke for questions, a man named Mohammed in the crowd reportedly began screaming that ISIS had already arrived in the United States:

A middle eastern man, that has never been there, stands up and introduces himself as Mohammad. He is from Iraq and begins to give everyone in the crowd a dissertation on his life, journey and tells us and the FBI guy that we have it all wrong. He tells us that we will never win against terrorists because we try to fix only the branches but never the root and the root of Islam is strong and growing. Then he offers a document to the FBI guy, telling him that he has evidence. Everyone chuckles! Then he says, ‘ISIS is here, let me repeat ISIS is here and you don’t know who we are, we are business leaders, business owners, your customers. You don’t know who they are. And one day they will come and show themselves and then they will attack and stab us in our back!’ while waving his had like wielding a knife.

The FBI asks if there is anymore questions so I quickly raise my hand, not knowing what I am going to say. He calls on me. I thank him and the FBI for there service and his wonderful presentation. I ask my question: With all the wonderful things the FBI is doing to protect us and keep us safe in Atlanta, what are you doing about the pink elephant in the room? The failed policies of this administration have left our borders wide open and terrorist are walking across in our back yard. What are you doing to protect my family and friends? He quickly doges the question by blaming it on politics and that it’s not his district. Then they quickly shut me down and rush him off stage for pics.

Attempting to talk to Agent Johnson about the open border after his photo op, the business owner says he was approached by police who told him that his “meeting was over.”

The agent’s brief mention of ISIS is surprisingly even more detailed than the FBI’s recent “National Threat Assessment for Domestic Extremism” document, which completely omits the threat of jihadist extremists.

Similarly, the National Consortium for the Study of Terrorism and Responses to Terrorism (START) alsoclaim that domestic groups pose a greater threat than any other. 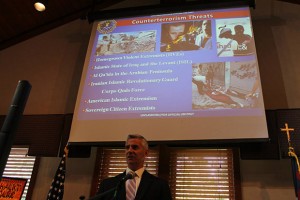