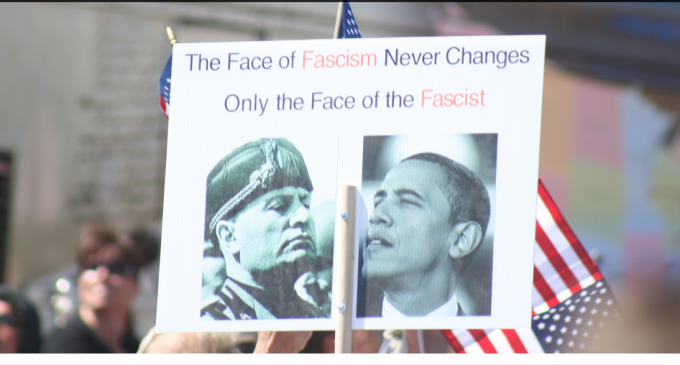 Obama has committed yet another illegal and completely unconstitutional act this week.

This Wednesday insurance companies received an email from U.S. Department of Health and Human Services stating that they must cover those uninsured due to the Obamacare rollout problems.

The government is forcing insurance companies to cover uninsured persons because of the ‘mistakes’ made by the government.

However, as Krauthammer points out, this was NOT a mistake, but a strategy to take over insurance companies!

Furthermore, because 40% of healthcare.gov hasn’t been completed yet, mainly the part on how insurance companies get paid, they are placed on the ‘honor system’, telling the government how much subsidies they are owed.

Fascism is the merger of government and corporate powers. Obama and his compliant Congress has now officially brought fascism to America via our healthcare system.

Of all of the last-minute delays, website bungles, and Presidential whims that have marred the roll-out of Obamacare’s subsidized insurance exchanges, what happened on Thursday, December 12 will stand as one of the most lawless acts yet committed by this administration. The White House—having canceled Americans’ old health plans, and having botched the system for enrolling people in new ones—knows that millions of Americans will enter the new year without health coverage. So instead of actually fixing the problem, the administration is retroactively attempting to force insurers to hand out free health care—at a loss—to those whom the White House has rendered uninsured. If Obamacare wasn’t a government takeover of the health insurance industry, then what is it now?

On Wednesday afternoon, health policy reporters found in their inboxes a friendly e-mail from the U.S. Department of Health and Human Services, announcing “steps to ensure Americans signing up through the Marketplace have coverage and access to the care they need on January 1.” Basically, the “steps” involve muscling insurers to provide free or discounted care to those who have become uninsured because of the problems with healthcare.gov.

HHS assured reporters that it would be “urging issuers to give consumers additional time to pay their first month’s premium and still have coverage beginning January 1, 2014.” In other words, urging them to offer free care to those who haven’t paid. This is a problem because the government has yet to build the system that allows people who’ve signed up for plans to actually pay for them. “One client reports only 15 percent [of applicants] have paid so far,” Bob Laszewski told Charles Ornstein. “So far I’m hearing from health plans that around 5 percent and 10 percent of consumers who have made it through the data transfer gauntlet have paid first month’s premium and therefore truly enrolled,” said Kip Piper.

“What’s wrong with ‘urging’ insurers to offer free care?” you might ask. “That’s not the same as forcing them to offer free care.” Except that the government is using the full force of its regulatory powers, under Obamacare, to threaten insurers if they don’t comply. All you have to do is read the menacing language in the new regulations that HHS published this week, in which HHS says it may throw otherwise qualified health plans off of the exchanges next year if they don’t comply with the government’s “requests.”

“We are considering factoring into the [qualified health plan] renewal process, as part of the determination regarding whether making a health plan available…how [insurers] ensure continuity of care during transitions,” they write. Which is kind of like the Mafia saying that it will “consider” the amount of protection money you’ve paid in its decision as to whether or not it vandalizes your storefront.

There are other services HHS is asking insurers to offer for free. The administration is “strongly encouraging insurers to treat out-of-network providers”—i.e., costly ones—“as in-network to ensure continuity of care” and to “refill prescriptions covered under previous plans during January.” But the issue of unpaid premiums looms largest.

But, of course, the cost of paying for those mistakes won’t end up being paid by insurers, but by consumers, in the form of higher premiums.

In theory, the Obama administration’s actions aren’t merely illegal—they’re unconstitutional. The Fifth Amendment of the Bill of Rights says that no one can “be deprived of life, liberty or property, without due process of law; nor shall private property be taken for public use, without just compensation.”

But it will be up to insurers to sue to protect their rights. Like battered wives, they are unlikely to do so. Companies like Aetna and Humana are so terrified that the administration will run them out of business that they are more likely to do what they’re told, and quietly pass the costs on to consumers. The chaos and recriminations have made insurers like UnitedHealth, who have largely stayed out of the exchanges, look smart.