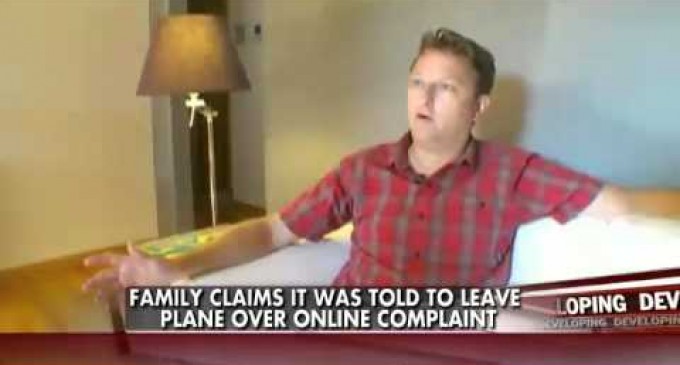 A Minnesota man, Duff Watson, was kicked off of his Southwest Airlines plane for a tweet he made complaining about mistreatment at the hands of a TSA agent. After the agent gave Watson a hard time about being able to board a flight with his kids, despite being an A-list passenger, he was forced to wait until later to board. Disgruntled with the TSA agent who was being tough with him, Watson told her “Real nice way to treat an A-list. I’ll be sure to tweet about it”.

And like many other frequent travelers, that's exactly what he did. Telling his local CBS nation that he tweeted something along the lines of  “Wow, rudest agent in Denver. Kimberly S, gate C39, not happy @SWA” before being forced to delete the tweet moments later. After the family had reached their seats, they were told that they needed to leave.

Click the link below for more info + watch video:

The agent told Watson that the tweet made her safety feel threatened. He was told that the only way to he could stay on his flight was to delete the tweet. On top of that she threatened to call the cops, scaring his children.

His daughter Lucy told local news that “She said ‘I’m going to call the cops,’”. She continued telling reporters “I, like, thought something bad was going to happen, like my dad being in jail.” At that point both siblings started to cry.

Watson decided that his best option was to delete the tweet and go on with his flight. When Southwest Airlines was confronted they gave out a mediocre apology and a 50 dollar voucher to each family member involved. “I was left, you know, very upset, very embarrassed, very humiliated,”  Watson said to his local news station.

So let's get this straight. A man is harassed for a harmless tweet, which supposedly “threatened” the TSA agent of a southwest airport. He's delayed and his two young children are scared by an uptight paranoid agent who thinks a disgruntled traveler is out to get him. He's embarrassed and humiliated by airport staff. And all he gets is a 50 dollar voucher and a half-baked apology.

The TSA has to go. It's an implausible agency that hasn't served its purpose  while at the same time costing us billions on top of being a massive violation of our civil rights and overall a huge nuisance. Watson is just one of the countless other Americans who have been harassed and violated by the TSA.

You can find out more about the encounter in the video below.