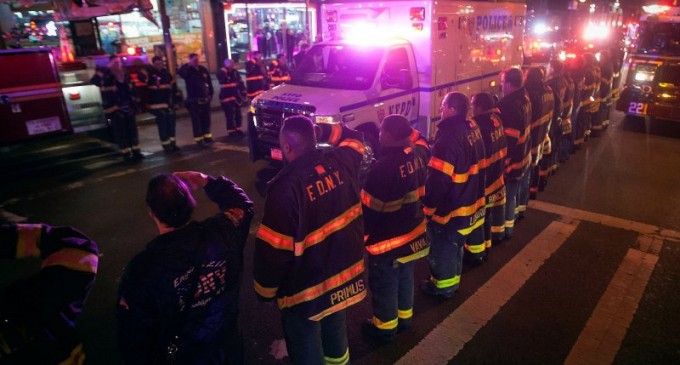 According to an eyewitness account of the killing of the 2 NYPD officers at the hands of Ismaaiyl Abdullah Brinsley earlier this month, not everyone who witnessed the executions was exactly grieving or otherwise taken back over the incident.

In fact, some were downright elated that 2 officers had been gunned down.

The eyewitness states that “A lot of people were clapping and laughing.” He continues, “Some were saying, ‘They deserved it,’ and another was shouting at the cops, ‘Serves them right because you mistreat people!’” he stated.

Throughout New York, the execution-style killing of these officers in the Bedford-Stuyvesant neighborhood of Brooklyn has generated a near-universal sense of horror at the crime—and sympathy for the victims.

“Now we have two families that’s missing someone from the holidays,” a Bedford-Stuyvesant resident told a local news station. “Where’s your sense of humanity?”

But the scene outside Woodhull Hospital wasn’t entirely supportive. “You’re a bunch of killers,” a passerby told cops standing sentry there, according to one police source. And short distance from the crime scene—where a crowd was backed up by the police tape—a few members of the crowd repeated “fuck the cops” within earshot of a Daily Beast reporter.

One 30-year-old local who gave his first name only as Carlos, didn’t hear the fatal gunfire but saw the hysteria aftewards and walked to the police tape.

“A lot of people were clapping and laughing,” he said.

“Some were saying, ‘They deserved it,’ and another was shouting at the cops, ‘Serves them right because you mistreat people!’” he said.

For Carlos, who walks his 10-year old daughter to school pass the police cruiser posted at Tompkins and Myrtle avenues, the double homicide—just a football field from his home of over a decade—was tragic.

“I walk my kid to school, passed that cop car everyday,” he said. “That’s their post. What would people rather not have the cops here to keep us safe?”

“Nobody deserves this,” he added. “If they really wanted to get revenge they should have gone to Staten Island and found the cops that killed Eric Garner.”

Others seemed less sympathetic towards the police, and even seemed to resent that the cops didn’t take as much notice of the area’s other crimes. While violent offenses are dramatically down in Bed Stuy, pockets of violence persist here.

“Gunshots is usual for this neighborhood,” said Kenneth Otero, 30, who lives in a ninth-floor apartment across the street in Tompkins Houses, the housing projects Officers Wenjian Liu and Rafael Ramos were assigned to.

He says he heard the two shots that killed Liu and Ramos.

“I was watching ‘Daniel The Tiger’ with my kid and I heard two shots like ‘boom-boom,’” he said.

“I walk my kid to school, passed that cop car everyday,” he said. “That’s their post. What would people rather not have the cops here to keep us safe?”

But he believes the cops are going too far in the investigation of the murder of two of their own, with scores of cops and idling vehicles, and powerful spotlights turning the night of Tompkins Street into a surreal daylight.

“They’ve been here all day and now tonight,” he said. “This has happened before and it wasn’t this big spectacle.”

Liu and Rafael were there to protect against the common criminality Otero mentioned. It is so common, that 22-year-old Yonas Tenayo was dodging bullets just the night before on her way home to her safer neighborhood of Clinton.