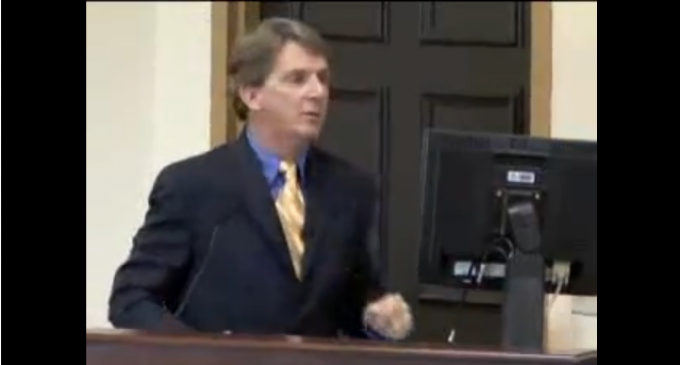 Learn how to protect yourself in this ever-encroaching police state.

Read the excerpt below on how not to get arrested, written by an ex-cop.

Next, be sure to check out the very illuminating videos below on why you should never talk to the police, by a criminal defense attorney.

Dale Carson is a defense attorney in Jacksonville, Florida, as well as an alumnus of the Miami-Dade Police Department and the FBI. So he knows a thing or two about how cops determine who to hassle, and what all of us can do to not be one of those people. Carson has distilled his tips into a book titled Arrest-Proof Yourself, now in its second edition. It is a legitimately scary book—369 pages of insight on the many ways police officers profile and harass the people on their beat in an effort to rack up as many arrests as possible.

“Law enforcement officers now are part of the revenue gathering system,” Carson tells me in a phone interview. “The ranks of cops are young and competitive, they’re in competition with one another and intra-departmentally. It becomes a game. Policing isn’t about keeping streets safe, it’s about statistical success. The question for them is, Who can put the most people in jail?”

Which would make the question for you and me, how can we stay out of jail? Carson’s book does a pretty good job of explaining—in frank language—how to beat a system that’s increasingly predatory.

Be Invisible to Police

Carson has four golden rules, the first of which is, “If police can’t see you, they can’t arrest you.” The simplest application of this concept is that if you plan on doing something illegal, you should do it in the privacy of your home. Yes, you can be arrested while at home, but you can’t be profiled sitting in your living room, and profiling is what you’re trying to avoid.

The rule extends to activities that are perfectly legal. “In 21st century America,” he writes, “as long as you’re not committing a crime, you should be able to wear the wildest clothes you want, roam the streets when you feel like it, and lean on a light post or hang out at some wild club if it amuses you.” “Should” is the key word. In reality, cops love hassling people who stand out, even though it’s not illegal to, say, have a Buckeyes bumper sticker that looks like a pot leaf. If you drive a sports car or a lowrider, you’re more likely to attract a cop’s attention than if you drive, say, a gray Honda Civic. Same goes for clothes, hairstyles, tone and volume of voice. Be boring.

So try to blend in. Beat cops who patrol the same routes day after day are “incredibly attuned to incongruity.” But don’t be too reactive when you see cops. “Police are visual predators,” Carson writes. “Any sudden change in motion, speed, direction or behavior immediately attracts their attention.” That means even if you’re doing something you think might attract a cop’s attention, quickly doing something else will attract even more attention. “Don’t alter the pattern,” Carson advises. “Keep on keeping on.”

Also, if you can help it, don’t go out after dark.

What if I can’t be invisible to police?

If police want to hassle you, they’re going to, even if you’re following the above tips as closely as possible. What then? Every interaction with a police officer entails two contests: One for “psychological dominance” and one for “custody of your body.” Carson advises giving in on the first contest in order to win the second. Is that belittling? Of course. “Being questioned by police is insulting,” Carson writes. “It is, however, less insulting than being arrested. What I’m advising you to do when questioned by police is pocket the insult. This is difficult and emotionally painful.”

Winning the psychological battle requires you to be honest with cops, polite, respectful, and resistant to incitement. “If cops lean into your space and blast you with coffee-and-stale-donut breath, ignore it,” Carson writes. Same goes for if they poke you in the chest or use racial slurs. “If you react, you’ll get busted.” Make eye contact, but don’t smile. “Cops don’t like smiles.” Always tell the truth. “Lying is complicated, telling the truth is simple.”

He also says you should be dignified—unless it looks like you’re about to lose both the psychological contest and the one for custody of your body. In which case, you should be strategically pitiful.
First off, you should ask for a notice to appear as an alternative to being arrested. You still have to go before a judge, but you can go under your own power without first going to jail. Carson says the least degrading way to get a cop to issue you a notice in lieu of arresting you is to tell them that you’re not a hardened criminal and that being arrested (and having your mugshot taken) is going to impact your employment, education and/or family.

And if that doesn’t work? It’s debasement time. Start with crying. Bawl hard while begging for a notice (the option here is a notice or jail, not notice/jail or getting off scot free). “Don’t waste time worrying about what your friends will think,” Carson says. “If they’re with you, they’re getting arrested too.” If they’re not with you, they won’t know.

If crying fails, and you’re willing to do whatever it takes to not go to jail, Carson advises you to “foul yourself so that the police will consider setting you free in order not to get their cruiser nasty.” Vomit on your clothes. Defecate and urinate in your pants. Then let the officers know what you’ve done. If they arrest you anyway, you’ll get cleaned and reclothed at the jail.
Reasonable things you should never do
If you’re driving too fast and see a police car up ahead, don’t hit the brakes. “If you suddenly hit the brakes,” Carson writes, “cops in front of you will see your front end dip, a tip-off that you were speeding.” Don’t drive perfectly, or too slow. Don’t slouch or put too much heavy stuff in your trunk, causing your car to ride low. If you’re a dude, and you want to roll around town with your fellow dudes, be prepared for a stop. “When cops see four young males in a car, they immediately wonder if this is a crew of criminals out to do a job.” If you’re going to ride four deep, have one member of your car wear a highly visible item of clothing indicating what you do for a living. For instance, if you’re all construction workers car-pooling on the way home from a job site, someone in the car should wear a hard hat. Seriously.
Another reasonable thing you should never do? Allow a cop to search your car. There are many loopholes that allow cops to search your car without probable cause or a warrant, but Carson advises you to say no every time. You should still follow all the rules of a traffic stop—keep hands where cops can see them, give them your paperwork, get out of the car if they ask you to—but never let them search. Always, always, always say no (politely).