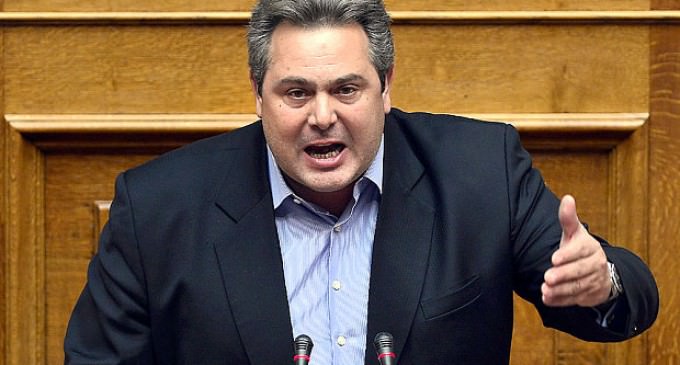 Greek Defense Minister Panos Kammenos has threatened to flood Europe with jihadists mixed in with migrants if no bailout money is given to assist with its economic crisis.

In anticipation of complete economic collapse this month, Greece is going so far as to threaten to provide EU travel papers to the 10,000 illegal immigrants held in their detention centers and to illegals crossing over its borders. As Greece borders Turkey, it essentially provides a buffer for the EU from ISIS militants seeking to enter Europe from bases in Syria and Iraq…so this is no empty threat even to Europe, who is already experiencing massive protests againt Islamization of the continent.

“If they deal a blow to Greece, then they should know the the migrants will get papers to go to Berlin,” he said.

“If Europe leaves us in the crisis, we will flood it with migrants, and it will be even worse for Berlin if in that wave of millions of economic migrants there will be some jihadists of the Islamic State too.”

Mr Kammenos, who is the leader of the Right-wing Independent Greeks party which is in coalition with Greece’s ruling far-Left Syriza government, said that the EU’s passport free “Schengen” travel zone left the eurozone vulnerable.

“If they strike us, we will strike them. We will give to migrants from everywhere the documents they need to travel in the Schengen area, so that the human wave could go straight to Berlin,” he said.

Last week, Nikos Kotzias, the Greek foreign minister, also told a meeting of his EU colleagues that if Greece was forced out of the euro “there will be tens of millions of immigrants and thousands of jihadists”.

EU officials have been so concerned by the Greek threats that the European Commission last week sought “assurances… that no measures to open up detention centres are being taken”.

Britain would not be as badly hit as Germany if Greece opened its frontier with Turkey as it has retained border controls but the Greek threat would place extra pressure on crossings such as Calais and increase the overall terror threat for all Europe.

Greece and its eurozone creditors agreed two weeks ago to extend the Greek bailout but negotiations with the new government have run in trouble threatening to cut Athens off from funds by the end of March.