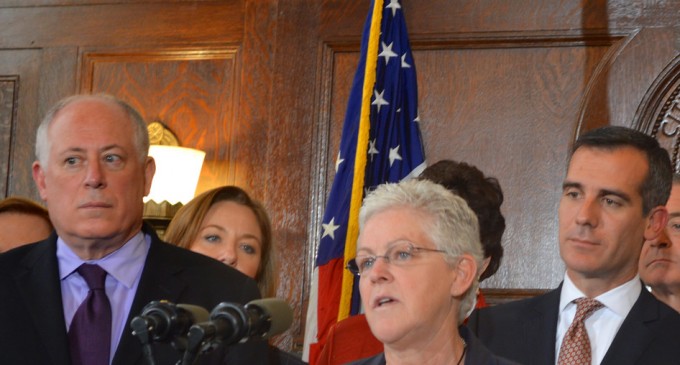 EPA chief Gina McCarthy has a warning to a “small but vocal group of critics” who challenge the EPA's science: “we’re coming for you.”

“Those critics conjure up claims of ‘EPA secret science’— but it’s not really about EPA science or secrets. It’s about challenging the credibility of world renowned scientists and institutions like Harvard University and the American Cancer Society,” McCarthy stated.

Rep. Sen. David Vitter (LA) and Rep. Lamar Smith (TX) have been pressing the EPA to release their ‘scientific' data, which McCarthy promised to do, but so far has failed to live up the that promise. Now she is on the attack.

“EPA’s leadership is willfully ignoring the big picture and defending EPA’s practices of using science that is, in fact, secret due to the refusal of the Agency to share the underlying data with Congress and the American public,” said Vitter.

“We’re not asking, and we’ve never asked, for personal health information, and it is inexcusable for EPA to justify billions of dollars of economically significant regulations on science that is kept hidden from independent reanalysis and congressional oversight,” Vitter added.

Environmental Protection Agency administrator Gina McCarthy has issued a warning to Republicans who continue to question the integrity of the agency’s scientific data: we’re coming for you.

McCarthy told an audience at the National Academy of Sciences on Monday morning the agency will go after a “small but vocal group of critics” arguing the EPA is using “secret science” to push costly clean air regulations.

“Those critics conjure up claims of ‘EPA secret science’— but it’s not really about EPA science or secrets. It’s about challenging the credibility of world renowned scientists and institutions like Harvard University and the American Cancer Society,” McCarthy said, according to Politico.

“It’s about claiming that research is secret if researchers protect confidential personal health data from those who are not qualified to analyze it — and won’t agree to protect it,” she added. “If EPA is being accused of ‘secret science’ because we rely on real scientists to conduct research, and independent scientists to peer review it, and scientists who’ve spent a lifetime studying the science to reproduce it — then so be it.”

Republicans Sen. David Vitter of Louisiana and Rep. Lamar Smith of Texas have led the charge on pressing the EPA to make publicly available the scientific data behind its clean air regulations. McCarthy promised she would make such data publicly available during her confirmation process last year. Now her refusal to cough up the data has angered Republicans.