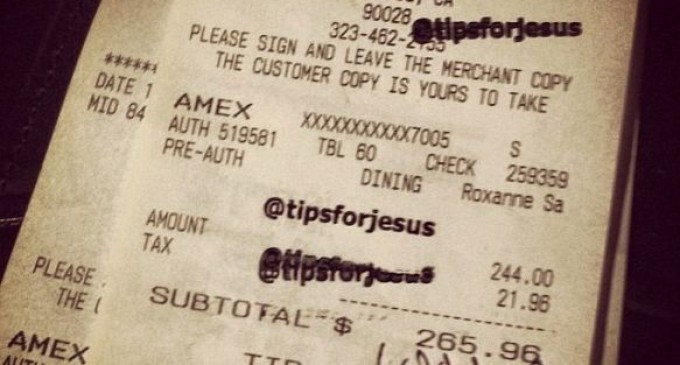 @tipsforjesus is an anonymous person or group that is leaving enormous tips all across the country.

The tips have been left at restaurants, bars, and strip clubs in cities from Ann Arbor, Mich., to Los Angeles.

The receipts are all signed with the Instagram handle @tipsforjesus. The feed bears the tagline, “Doing the Lords [sic] work, one tip at a time.”

It happens every year during the holiday season, when the red kettles and ringing bells of Salvation Army donation posts are set up outside of stores across the country. Along with the spare change and occasional crumpled bill, a gold coin is slipped into the donation receptacle.

This year, an equally generous—and far more viral—group (or individual?) has been taking part in the anonymous holiday-giving spirit on a scale that makes the stray gold coin look small. A series of epic tips have been left at restaurants, bars, and strip clubs in cities from Ann Arbor, Mich., to Los Angeles. Following a tip that's a few 100 times more than 20 percent, the receipts are all signed, in a manner, with the Instagram handle @tipsforjesus. The feed bears the tagline, “Doing the Lords [sic] work, one tip at a time.”

There's $500 left on a $24 tab at a dive bar, $3,000 left on an $88 check at a restaurant. Sometimes, the grinning faces of servers appear next to the check that made their night—if not their month.

Unlike recent incidents of servers getting stiffed for religious reasons, @tipsforjesus leaves a lot of money and little ideology. In addition to those strip club bills, there’s a check that totals “$122979.42,” because “math is hard at 1am after three grand of tequila,” as the caption explains.

Even if the numbers are at times miswritten, @tipsforjesus is unequivocal that it’s good for the money. After a $10,000 tip left at a bar in South Bend, Ind., raised concerns of fraud, a screen grab of an American Express statement was posted to the Instagram account. The caption reads, in part, “tips for jesus pays it’s tabs.”