Barack Obama made a declaration the other day that was unprecedented in presidential annals and outrageous in its assertion. He flatly stated that Trump is unfit to assume the presidency. Rather than trusting that the American people can decide who is best to lead the nation, Obama shared this unwarranted opinion that he knows what and who is best for the nation. It is especially troubling because of its implications. If Trump is truly unfit or unqualified, it raises the question of what Obama should do if Trump is, in fact, elected.

There are multiple scenarios that may cause Obama to take action in order to “save the nation.” Let’s take a look at 3 possiblities… 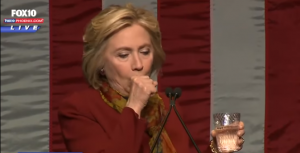 Hillary Clinton appears to be following in Obama’s socialist footsteps, and will only solidify and extend his destructive programs. However, she appears to be quite ill, with frequent coughing spells and a dissipated and haggard look, plus a history of hiding her health problems so that no one is quite certain what is wrong.

In the run-up to the election, with the associated stress and high energy that is required, it is not unfeasible that Clinton could die or become seriously ill, with the result that Trump would likely be elected since he would be running against an empty pantsuit.

Barack Obama could then very easily declare that the election was spoiled and would need to be run again. He would also graciously offer to step in and “keep things running” indefinitely and the coup would be complete.

There is no doubt that Obama is sufficiently presumptuous and lawless to institute such a theft, and there is a huge number of idiotic citizens who would support him.

Move on the the next page for the second possible scenario: