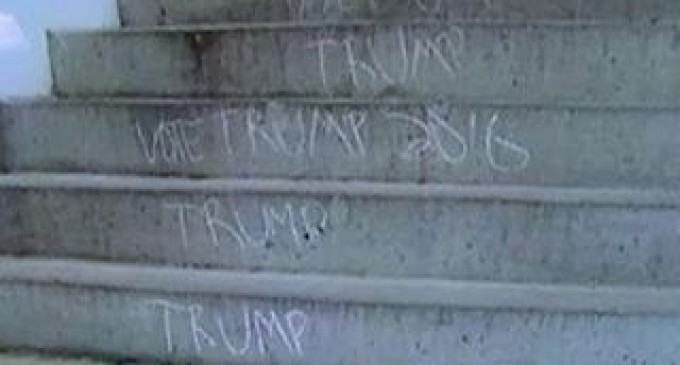 University students are some of the biggest cry-babies in the world, unable to handle a hangnail, let alone a real crisis that actual adult life might bring them.  They have been coddled, told they are special, can do anything and deserve everything and that the rich owe them and that their feelings have more value that actual fact and truth.  With roughly 12.2 million college students in the U.S., that is a lot of coddled college co-eds!

Enter Emory University students who are perfectly demonstrating the arrested development found in co-eds across the liberal college campuses in America. Apparently, a “safe space” was violated when “hate” chalk was used on the side walks and buildings, causing students to be in “pain and fear”.  The offending message was a chalk graffiti that read, Trump 2016.

The crazy even gets worse!  One student stated that she “feared for her life” because she believed a KKK rally was occurring on campus.  Nothing says KKK like the word Trump written in chalk.  There isn't even the letter K in the name Trump!

Other students were foolishly afraid that chalk drawings would result in a mass shooting, thus they would not walk alone.

The rest of the outrageous behavior found on the Emory campus can be read on the next page.