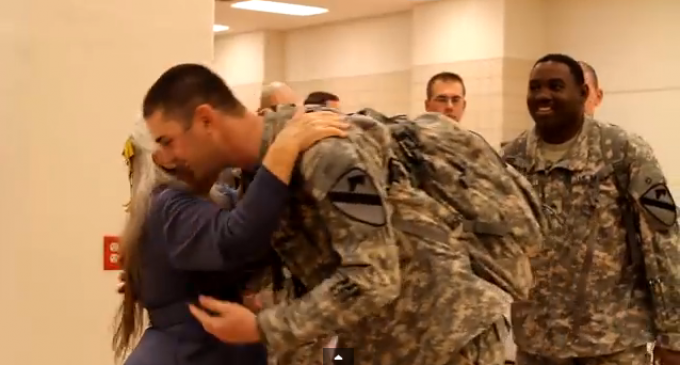 Elizabeth Laird, a.k.a. the Fort Hood Hug Lady, has been embracing our soldiers for 10 years now, and at 81-years-old, she’s still at it.

She also is there when they return home.

At 81, Elizabeth Laird, the Fort Hood Hug Lady, has bade goodbye to and welcomed home uncountable numbers of service members on outbound and incoming flights. And going on 10 years, she’s still at it.

“I’m there right now,” Laird said by phone last week. “I just put some soldiers on a plane.”

The American-Statesman first brought you the diminutive woman’s story in 2010. Things started when a soldier hugged her while she was working as a Salvation Army volunteer at the base. She hugged another, and another, and soon enough, the installation’s then-command sergeant major said he wanted her to hug “every soldier coming and going.”

That she has been doing, with no more than 10 flights missed — some of which were during a hospital stay, and she sent a proxy then — since June 2003, months after the American invasion of Iraq.

She hugs the soldiers guarding the security gate at Fort Hood’s entrance. She hugs service members when she travels. She has dispensed tens, perhaps hundreds, of thousands.

“You know what my purpose is,” said the Air Force veteran and one-time wife of a Marine. “My purpose is to tell them the Lord will protect them if they ask him. I give them the 91st Psalm, the soldier’s psalm, and if there’s no chaplain, I’ll pray for them.”

Laird lives in nearby Copperas Cove and still has her income tax business, Have Pencil Will Travel. She was hard at work last week on completing her clients’ taxes by the deadline.

Had she finished hers?