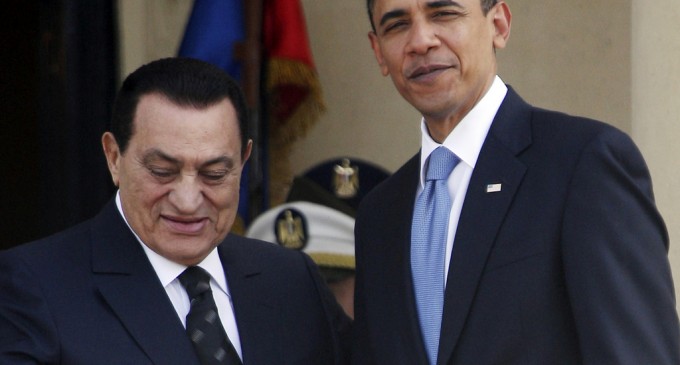 Charges of crimes against humanity have been filed in the International Criminal Court against Obama for his activities with the Muslim Brotherhood in Egypt.

What about his criminal activities with the Muslim Brotherhood here in America? When is someone going to get around to that?

According to Egyptian newspaper El Watan, a group of Egyptian lawyers has submitted a complaint charging U.S. president Barrack Hussein Obama with crimes against humanity at the International Criminal Court.

The complaint charges Obama of being an accessory to the Muslim Brotherhood, which incited widespread violence in Egypt both before and after the June 30 Revolution.

Along with Obama, the complaint reproduced by El Watan mentions several Brotherhood members by name, beginning with the leader of the organization Muhammad Badie, and other top ranking leaders such as Mohamed al-Beltagy, Essam al-Erian, and Safwat Hegazi, adding that “Obama cooperated, incited, and assisted the armed elements of the Muslim Brotherhood in the commission of crimes against humanity in the period from 3/7/2013-8/18/2013, in the Arab Republic of Egypt.”

According to the published text, the complaint begins by quoting Article 7/1 of the Statute of the International Criminal Court, titled “Crimes against humanity,” which is reproduced below:

1. For the purpose of this Statute, “crime against humanity” means any of the following

any civilian population, with knowledge of the attack:

(e) Imprisonment or other severe deprivation of physical liberty in violation of fundamental rules of international law;

sterilization, or any other form of sexual violence of comparable gravity;

(h) Persecution against any identifiable group or collectivity on political, racial,

national, ethnic, cultural, religious, gender as defined in paragraph 3, or other

grounds that are universally recognized as impermissible under international

law, in connection with any act referred to in this paragraph or any crime

within the jurisdiction of the Court;

(i) Enforced disappearance of persons;

(j) The crime of apartheid;

suffering, or serious injury to body or to mental or physical health.

Next, the complaint shows how Muslim Brotherhood leadership violated some of the above definitions, for example, by torturing, mutilating, raping, and killing Egyptians in their “sit in” camps (first reported here), with a highlight on the role the Brotherhood played in inciting violence and the killing of peaceful protesters around Itthadiya Palace back in December.