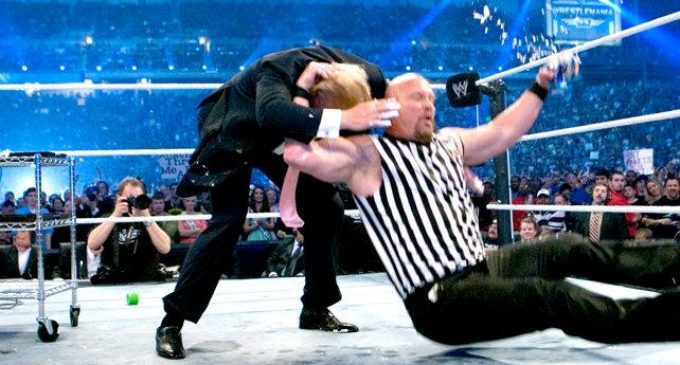 If you're still looking for a reason to vote for Donald Trump or are currently trying to justify why you're voting for the man (besides the obvious fact that Hillary will bring doom to America) look no further. For those of you who grew up watching wrestling, tuning in every Monday night for WWF Raw and Thursday night for WWF Smackdown, you're no doubt in tune to the magic that is professional wrestling. And even watching it as an adult you can't help but thinking that the organization and those who are a part of it are really bad ass. Well, here's some good news, Donald Trump is actually a part of all that, and he's even been featured on Wrestlemania!

Donald Trump has brought America quite a few firsts in this election. For example, he's the first person to ever run for president who truly doesn't care what anybody thinks and doesn't care to censor what he says in order to not offend people. And the badassdom doesn't stop there. If he wins the election, he could very well be the first president to be featured on WWE. Yes, it's all very scripted, but that doesn't make it any less great. It all starts out with what Donald Trump is most well known for, and I don't mean making Hillary and her liberal cronies angry.

Watch the match on the next page.