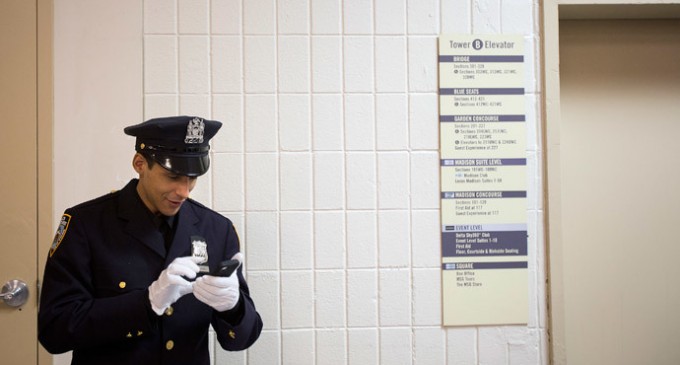 In the latest assault on our privacy and our rights, the Dept. of Justice is urging the Supreme Court to allow police to search cell phones without a warrant.

The DOJ argues that suspects could remotely erase the phone with a ‘kill switch’ before a warrant is obtained.

It seems that our Constitutional rights are just too pesky nowadays for police to actually have to find evidence ‘the old fashioned way’ – actually working within the confines of the law for its discovery.

The US Department of Justice is arguing that police should be able to search cell phones taken from suspects upon arrest, lest the suspect or an associate use a universal “kill switch” to remotely lock or wipe the phone before it’s searched.

In a brief to the US Supreme Court filed Wednesday in the case of an alleged Boston drug dealer, the Justice Department backed law enforcement’s ability to immediately search a suspect’s phone in case the contents of the phone – potential evidence to the DOJ – are erased by the suspect or someone else before police can inspect it.

“This Court should not deprive officers of an investigative tool that is increasingly important for preserving evidence of serious crimes based on purely imaginary fears that police officers will invoke their authority to review drug dealers’ ‘reading history,’ … ‘appointments with marital counsellors,’ or armed robbers’ ‘apps to help smokers quit,’” said DOJ attorney Donald Verrilli Jr., in a statement.

The specific examples he cites were included in opposing briefs filed in the case by civil liberties groups, which argued warrantless searches of cell phones for evidence are a violation of suspect’s rights beyond searches of a suspect’s clothing or bag, for example.

Verrilli added that “searching an arrestee’s cell phone immediately upon arrest is often critical to protecting evidence against concealment in a locked or encrypted phone or remote destruction.”

Law enforcement has also called for the opposite, for cellphone makers to enable “kill switch” technology in an effort to reduce stem damages from phone theft.

In fact, major officials such as New York State Attorney General Eric Schneiderman, among others, have supported the “kill switch” effort, which led to a bill that was recently introduced in the US Senate that requires all smartphones to have the technology that allows owners to erase or encrypt content if the phone is stolen.

The DOJ argues that criminals have become more advanced as phone technology has evolved, thus these capabilities are vital to combat lawlessness.

There are better ways to handle evidence destruction than allowing warrantless searches, said Hanni Fakhoury, an attorney with the Electronic Frontier Foundation. He told Wired it would be easier and more in line with a suspect’s rights to, upon an arrest, remove a phone’s battery, turn the phone off, or place it in a Faraday cage to block radio signals while police appeal to a judge to approve a warrant.

“The government can point to no actual statistics that show this is a widespread problem,” said Fakhoury. “And the reality is that most people don’t even have remote wiping technology on their phone.”

The DOJ argued in the brief that, even if the Court does not agree with warrantless phone searches, police should still be able to access a phone’s call history. The department referenced the “third party doctrine,” which states that a person does not have a “reasonable expectation of privacy” regarding information willingly offered to a third party like a phone company. Thus, the data are not protected by the Fourth Amendment.

Though the ACLU’s Soghoian pointed out that the data being searched isn’t in the hands of phone companies; it is stored on the device. If companies controlled the contents, law enforcement wouldn’t need to access the phone.

“What matters isn’t just the information, but where they get it from,” said Soghoian. “They’re saying that there are certain things on your phone that have less protections than others under the law, which is crazy.”