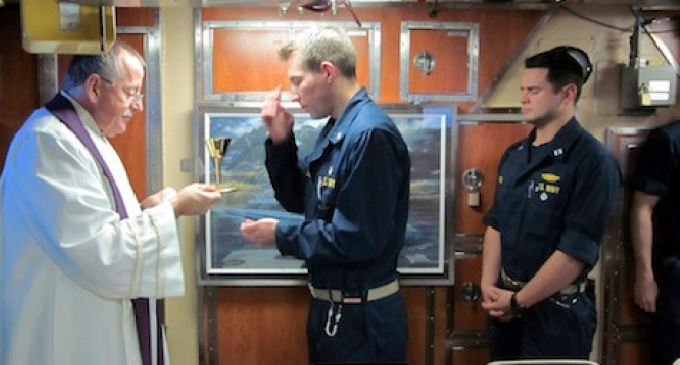 The DOJ is retaliating against the priest who filed suit over not being able to perform Mass during the government shutdown.

The DOJ canceled his DOD contract and initiated another, which has prevented him from being paid. He is now suffering financial hardship and it's unclear whether he will be paid for services rendered last year.

“No other military chaplain contracts were under review or subjected to the same scrutiny as Father Leonard’s,” according to his lawyer at the Thomas More Law Center (TMLC).

Move over Obama, the executive branch isn't the only one who gets to operate like a totalitarian regime.

A Catholic Navy Chaplain, who sued the Department of Defense and the Navy after he was banned from celebrating Mass at a Georgia naval base during the recent Government shutdown, appears to  be the target of a Federal government retaliation.

In October, the Reverend was threatened with arrest if he performed any of the sacraments during the shutdown. Consequently, Father Ray Leonard filed a lawsuit against the Department of Defense for prohibiting him from serving Mass and performing other spiritual duties which he was called upon to do as a Catholic priest. A day after the suit was filed, he received a letter from the DOJ reinstating his right to serve Mass. However, one week after receiving the letter, he was informed that his DOD contract was no longer valid.

The DOJ offered him a new contract that contained more “onerous” language, stipulating that, in order for the priest to be paid, he agree not to receive payment for services he had already rendered. “No other military chaplain contracts were under review or subjected to the same scrutiny as Father Leonard’s,” according to his lawyer at the Thomas More Law Center (TMLC). Father Leonard had not received any remuneration for November and suffered financial hardship. It is unclear whether he will receive pay for December.

Leonard lives close to the Kings Bay Naval Submarine Base in Georgia, where he performs his duties as a priest. He is responsible for paying his own rent and his meals. Erin Mersino, counsel for Father Leonard, explained that “Father Leonard just returned to America after spending ten years ministering to impoverished Tibetans in China. Consequently, withholding Father Leonard’s earnings for approximately two months left Father Leonard himself in an impoverished condition. Yet, he continued to minister to his congregation by scraping up enough money for food and rent payments for housing near the Naval Base which he serves.”

Mersino says the TMLC has filed an amendment to the original law suit including adding the retaliation complaint. “The Petition Clause of the First Amendment protects individuals who challenge the unconstitutional actions of the government from retaliation. The Archdiocese for the Military Services confirmed that no other military chaplain contracts were under review or subjected to the same scrutiny as Father Leonard’s.  Thus, due to the timing of the Navy’s actions and the information gleaned from the Archdiocese for the Military Services, all signs point to Father Leonard being singled out and subjected to unlawful retaliation for bringing the government’s practices to light.”

The Department of Justice has requested an additional sixty (60) days to respond to the amended complaint, and the Court ordered their response by March 3, 2014.