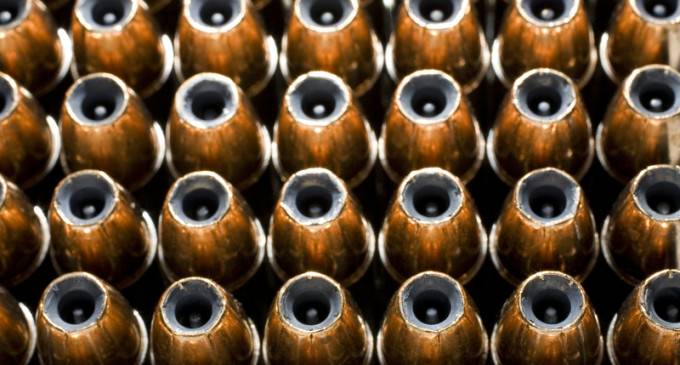 The government continues to stockpile ammo with the recent solicitation by the Dept. of Justice for 95,000 rounds of 9mm hollow-point bullets. DHS just this month solicited for 62 million more rounds of AR-15 ammo. This is on top of the infamous purchase of 1.6 million rounds they have already purchased.

Around 74 non-security related federal agencies, like the USDA and the Railroad Retirement Board, have been militarized with their own SWAT – giving Obama his own private army. All the while local law enforcement across the country have been militarized to the teeth and continues to receive military hardware from the DOD.

The current solicitation, posted at FBO.gov, is for the Department of Justice’s Bureau of Prisons. In addition to the specified 95,000 rounds of “9 mm Lugar Jacketed Hollow Point 115 Grain” bullets, it also seeks 46,000 rounds of .223 caliber 55 grain full metal jacket bullets and 4,750 rounds of 12 gauge shotgun shells.

The deal will be completed through a “reverse auction” in which prospective sellers will submit lower and lower bids for supplies that meet the government’s demands.

Also, no remanufactured or “gray market” materials are acceptable.

The hollow tip allows the bullet to expand on impact, causing the most collateral damage possible. The kinetic energy is applied directly to the target, as the bullets often stay inside the target and maximize “stopping power.”

See the different between a 9 mm bullet striking a melon and a hollow point of the same size:

WND has reported the federal government’s ammunition purchases have attracted considerable attention, including from members of Congress such as Rep. Tim Huelskamp, R-Kan.

The rise in purchases comes amid attempts to curb consumers’ access to certain weapons and ammunition.

Critics of the program charged it was an underhanded way of infringing the Second Amendment without having to go through Congress.

Rep. Sean Duffy, R-Wis., called it “the greatest government overreach that no one is talking about.”

He’s among several on the Financial Services Subcommittee on Oversight and Investigations emanding answers from FDIC chairman Martin Gruenberg, the Daily Signal reported.

WND also reported when the federal government announced a ban, through the Bureau of Alcohol, Tobacco and Firearms, on ammunition used in AR-15 rifles, among the most common firearms in the nation.