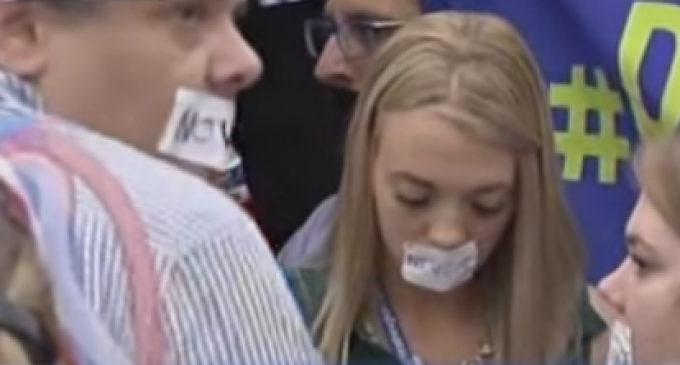 The Democratic National Convention is trying to project a love-fest for Hillary Clinton. Unfortunately, she is not very lovable or trustworthy, and in fact projects a cold and grating persona.

The hacked emails from the DNC clearly showed a corrupt and cynical organization that was touched by racism, religious bigotry, and an obvious effort to hand the nomination to Hillary on a silver platter, and to get crazy Bernie Sanders out of the race. That clearly demonstrated that the DNC denials of favoritism were absolute lies, and the fix was in from the beginning. So with their hands stuck elbow-deep in the cookie jar of political corruption, what does the DNC demand? An FBI investigation to see if Russia is involved in the hacked emails. It is truly amazing that these folks can be so corrupt without even indicating a hint of remorse. Instead, they simply try to misdirect attention to find and blame whoever caught them in their dirty tricks. It is tragic that average Democrats are willing to support such a grossly dishonest crew.

However, not everyone was buying in to the crass display of raw political abuse. Bernie Sanders supporters, in spite of watching Bernie roll over and support the criminal Clinton, were heard shouting “Lock Her Up,” which was a repeated refrain in the Republican convention but hardly something one would expect during the Democrat gathering praising their new party leader. Of course the DNC leadership could not allow delegates to show disunity, so they threw Bernie supporters out and moved them to remote areas where the media would not be able to see them. And just to be certain that the will of the delegates did not gain strength, a SWAT team was brought in to ensure there was peace and quiet while the speakers praised Hillary to the heavens. If it sounds like something that would happen in places like Cuba or Venezuela, which happen to be Democrat models of social order and decorum, that is what it was… except for the burning American flags and the storming of the media tent.