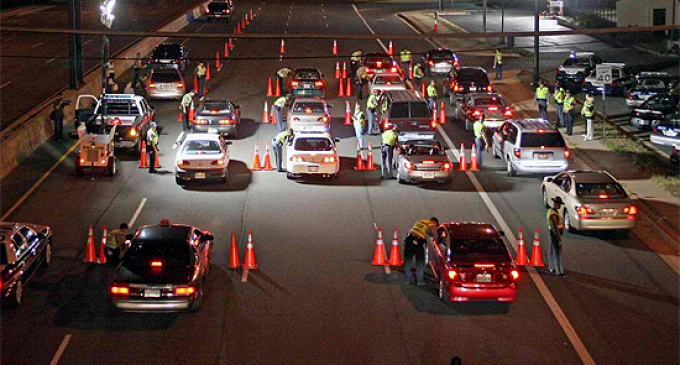 LAPD is conducting ‘voluntary’ cheek swabs this New Year’s Eve in checkpoints using a new technology that enables cops to see what’s inside your body instantly.

Medical marijuana use is the reason given for the procedure.

Meanwhile, a resident is suing the city of Reading, Pennsylvania for conducting these same tests.

Do we really believe that the only intention is to check for drugs? People are being made to pull over and submit their DNA. This is beginning of the governments creation of a national DNA database for all Americans.

In Los Angeles, New Year’s Eve will be celebrated for all of the usual reasons. For many, those celebrations will include varying degrees of intoxication, from alcohol or drug use.

With that expected influx of intoxicated people, the Los Angeles Police Dept expects, as is the case every year, some of them will be driving. Public safety is “the Great Justifier.” It is the open door into which they insert the government foot.

The Los Angeles Police Department has announced their plans to utilize a portable tool that checks for drug use a part of their annual New Year’s Eve crackdown. An expansion of medicinal marijuana use is the rationalization.

The tool will be deployed at state DUI checkpoints and in jails. Funding will be provided by a state grant. The tool involves a swab test that is intended to be used in conjunction with breathalyzers, giving the state a capability for rapid testing not only for alcohol, but for illegal drugs as well.

The officers will request a driver to “voluntarily” submit to the portable oral fluids test of their gum line and cheeks. The tip of the tool is then inserted into a portable machine which provides immediate results of what it discovered inside the driver’s body. This provides an alternate testing method to blood tests. Blood tests have been required to obtain evidence of arrests in the past for suspicion of drugged driving.

The Los Angeles City Attorney, Mike Feuer, described a need for stepped-up enforcement of DUI policing due to the growing prevalence of medical marijuana dispensaries in the city.

In a press conference, He stated, “There’s a growing recognition that driving under the influence of drugs is something we need to be clamping down on more effectively. Traditionally, our office has focused on drunken driving cases. We’re expanding drug collection and aggressively enforcing all impaired-driving laws.”

The new tests are reportedly able to identify the use of amphetamines, cocaine, benzodiazepine (Xanax), methadone, methamphetamine, narcotic analgesics, and THC – which indicates that marijuana has been used within the past several hours.

As far as fourth amendment protections are concerned, the same rulings which permit forced blood extraction for evidence would likely apply as well to the new tests.

A June, 2013, US Supreme Court ruling affirmed law enforcement’s right and declared the legality of taking DNA samples from anyone who is arrested, including those who have not been convicted of a crime or gone to trial.

Los Angeles County historically has one of the largest DNA-sample backlogs in the US, including an especially high number of unprocessed rape kits. No information as to the ultimate disposition of any of the information obtained through these kits was provided.

Following reports that police in Reading, Pennsylvania, participated in a national survey, in which random citizens were pulled over and asked for “voluntary” cheek swabs, a courageous resident filed a lawsuit against the city, its mayor and several others claiming his Fourth Amendment rights were violated.

Nieves was irked when on Friday, December 13, he drove up to a street where police lights were flashing and orange security cones lined the lane.

According to the suit, Nieves was driving in the right hand lane and that the left lane “was full of traffic such that he could not pull over to change lanes.”

Nieves’ lawsuit, obtained by Courthouse News, further states an officer “stepped out into plaintiff’s lane of traffic, blocked his further advance, and flagged him to pull off the public road into a parking lot on Laurel Street.”

There, Nieves says a woman with a clipboard walked up to him, stated he was not being “pulled over” and proceeded to ask if he would participate in a survey. According to the lawsuit, the woman explained “the purpose of the stop was a survey of drivers’ behavior and that she wanted to take a cheek swab to check for the presence of prescription drugs.”

Knowledgable of his Fourth Amendment rights, which are supposed to protect U.S. citizens from unreasonable and unwarranted searches absent of probable cause, Nieves repeatedly refused the surveyor’s request for a cheek swab, and after five minutes ultimately asserted “very firmly, ‘No. Thank You.’”

When Nieves researched the checkpoint, it disturbed him to find it was conducted by the Pacific Institute for Research and Evaluation, commissioned by the National Highway Traffic Safety Administration at the behest of the White House Office of National Drug Control Policy.

He also found out it was conducted with the full cooperation of the city of Reading and its police department and that they were awarded a considerable sum for their part.

“The checkpoint was part of a $7.9 million, three-year survey by the agencies, which has been conducted several times since the 1970s,” reported the Reading Eagle.

“This was nothing more than a gross abuse of power and federal intrusion of my rights,” Nieves told Alex Jones during a live interview after his story broke nationally.

Of course, the Reading police chief thinks matters are being blown out of proportion. “People are not pressured by police presence to do something they don’t want to,” Police Chief William M. Heim told the Reading Eagle. “In the grand scheme of things, I think it’s a pretty innocuous and minor issue.” Heim is included in Nieves’ suit as a defendant, along with Reading Mayor Vaughn Spencer and the Pacific Institute for Research & Evaluation.