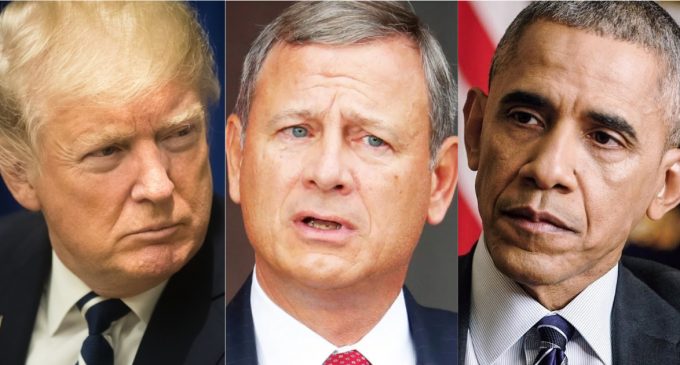 What’s suddenly got Justice Robert’s robe all in a wad? He didn’t speak out in June of 2016 when then-candidate Trump said that the U.S. District Court Judge Gonzalo P. Curiel was biased against him because of Curiel’s Mexican heritage. Roberts didn’t comment when newly-elected Trump ripped into federal judge James L. Robart after he halted Trump’s travel ban. Roberts did say a word when the President criticized judges in Hawaii and California who issued similar rulings. Roberts didn’t even speak up after Trump threatened to break up the Ninth Circuit after criticizing a California judge on the court for blocking an executive order on sanctuary cities.

No, Robert spoke up after Trump tore into the Ninth Circuit for issuing temporary restraining order blocking a new policy denying migrants asylum who cross the border between recognized ports of entry.

“It’s a disgrace when every case gets filed in the Ninth Circuit,” Trump said. “That’s not law. . . . Every case, no matter where it is . . . they file it in what’s called the Ninth Circuit. This was an Obama judge. I’ll tell you what, it’s not going to happen like this anymore.”

“We do not have Obama judges or Trump judges, Bush judges or Clinton judges. What we have is an extraordinary group of dedicated judges doing their level best to do equal right to those appearing before them. That independent judiciary is something we should all be thankful for,” Roberts said in a public statement.

Of course, Trump seized the opportunity to comment further on the Ninth Circuit court.

Sorry Chief Justice John Roberts, but you do indeed have “Obama judges,” and they have a much different point of view than the people who are charged with the safety of our country. It would be great if the 9th Circuit was indeed an “independent judiciary,” but if it is why……

…..are so many opposing view (on Border and Safety) cases filed there, and why are a vast number of those cases overturned. Please study the numbers, they are shocking. We need protection and security – these rulings are making our country unsafe! Very dangerous and unwise!

Justice Roberts can say what he wants, but the 9th Circuit is a complete & total disaster. It is out of control, has a horrible reputation, is overturned more than any Circuit in the Country, 79%, & is used to get an almost guaranteed result. Judges must not Legislate Security…

….and Safety at the Border, or anywhere else. They know nothing about it and are making our Country unsafe. Our great Law Enforcement professionals MUST BE ALLOWED TO DO THEIR JOB! If not there will be only bedlam, chaos, injury and death. We want the Constitution as written!

All this probably left Justice Roberts with some regret over not biting his tongue.

Turn the page to see the difference between an Obama judge and a Trump judge.