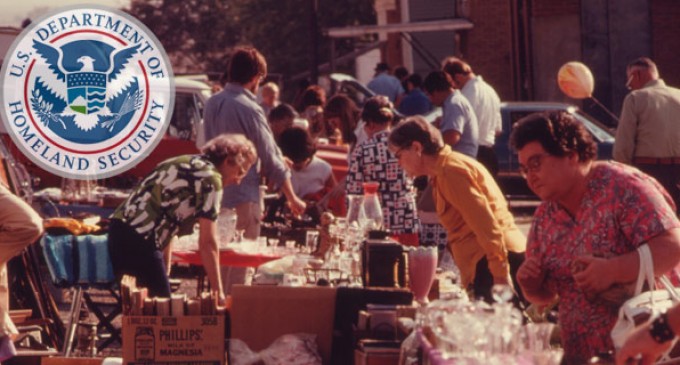 The Dept. of Homeland Security, along with local law enforcement, raided a flea market this past weekend near Lawrence, Mass., arresting 40 people for selling counterfeit goods.

Since when is DHS suppose to be raiding flea markets? Aren't they suppose to be tracking down terrorists? Oh wait, that's what the Muslim Brotherhood organization considers Americans to be.

“This is an effort to support local, legitimate businesses who have complained of these individuals selling bogus merchandise,” Interim Lawrence Police Chief James Fitzpatrick said of the sweep last night.

“Over the course of several months, we targeted individual selling counterfeit goods and counterfeit intellectual property. Our investigation culminated with the arrests of over 40 people involved in selling these illicit items,” he said. “In recent history, I believe this is probably the largest raid in Massachusetts involving counterfeit goods.”

The raids began at about 11 a.m. yesterday and lasted through late afternoon. The raids took place at Don Flea Market at 85 Manchester St., and Lawrence Flea Market and Auction House at 468 N. Canal St, near the Falls Bridge, according to Fitzpatrick. The Police Department used several vans, some of them loaned by the Essex County Sheriff’s Department, to transport the defendants to the Lawrence Police Department, where they were being booked last night.

Fitzpatrick said he believed that most of those charged were from out of town.

“We were part of the investigation and we will prosecute,” she said.

Police referred all comments on the raid to federal authorities. Calls to the U.S. Attorney’s office and Homeland Security were not returned.

“There’s a great deal of evidence that needs to be cataloged,” Fitzpatrick said of the items seized. Some of the counterfeit items sold were fake lines of clothing, he said.