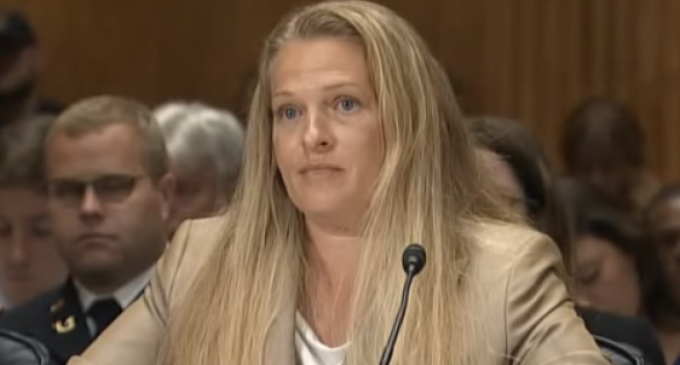 The administration's contempt for whistleblowers was on full display in its treatment of a brave ICE agent who took a stand for our country's immigration laws.

Thinking she was doing the responsible thing by going to Congress to voice her complaints, the Department of Homeland Security unceremoniously dismissed ICE Special Agent Taylor Johnson. Her dismissal comes in the wake of revelations that the department was leaking information to newspapers to tarnish Johnson's image.

DHS' conduct must have been extremely bad for them to not only do that, but to also offer her a $100,000 severance package, provided she did not discuss her case publicly any further. Disgusted by the offer, Johnson flatly rejected it and plans to continue speaking out against what she saw at ICE.

A veteran agency employee, Johnson was up on her way in the world when she incurred the wrath of Senate Minority Leader Harry Reid by opposing a foreign-backed visa program. Since then, she has been hounded by administrative hassling that culminated in her dismissal this week.

Johnson's troubles began back in 2013, when she uncovered visa applicants from countries like China, Russia and Pakistan were being admitted into the US with little to no attempt to verify their trustworthiness. Being a model agent with many awards and no disciplinary issues, she aimed to solve the problem. But things took a turn for the worst when she crossed paths with one Cory Reid, son of the senator from Nevada.

“Despite all the media coverage of her case, including a Washington Gadflyreport that the ICE press secretary with the approval of Breasseale was peddling confidential information to discredit her in violation of the Privacy Act, Taylor is not surprised she got the boot.

‘My entire chain of command was appointed by Obama,' she remarked. ‘They can do anything they want.'

In testimony last June to the Senate Committee on Homeland Security and Governmental Affairs Johnson said she was stripped of her gun and badge, without explanation, after discovering fraud and abuse.

‘Some of the violations investigated surrounding the project included bank and wire fraud, and I discovered ties to organized crime and high-ranking politicians and they received promotions that appeared to facilitate the program,' Johnson testified.

She said that during her investigation in 2013, she ‘discovered that EB-5 applicants from China, Russia, Pakistan, Malaysia had been approved in as little as 16 days' and that case files ‘lacked the basic and necessary law enforcement queries.'

At ICE, Johnson had amassed many awards and never had any disciplinary problems. But everything changed abruptly in 2013 when she invoked the ire of Senator Reid by holding up a visas for a foreigner investor in a Las Vegas casino represented by his son, attorney Cory Reid.

The Senator’s office complained to Johnson’s Special Agent in Charge. She was then placed on administrative leave, without explanation, on October 13, 2013.”