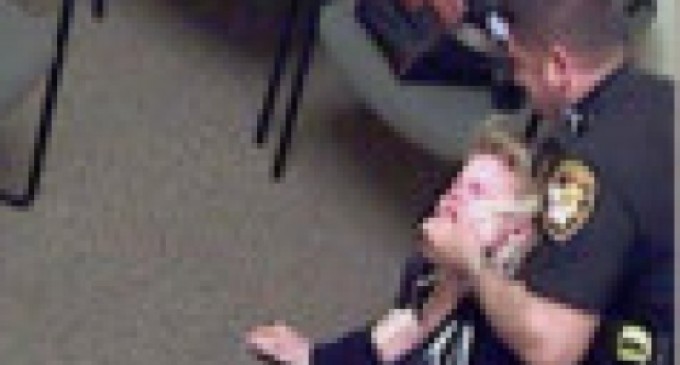 Siobhan Householder had her mouth forcefully opened by a sheriff's deputy in Summit County, OH after she took a prescription Tylenol while waiting in domestic relations court.

After the cop told her to spit it out, she said she couldn't and before being able to explain that she had already swallowed one and that it was prescription Tylenol for a problem tooth, the sheriff threw her on the ground and forcefully opened her mouth.

Police state that she was actually under arrest and that it was for her safety. She states she was unaware she was under arrest because she came to court on her own.

“He said, ‘What are you taking?’ and I said, Tylenol,” she recalled. “And he said, ‘Spit it out’ and I said, ‘I can’t.’ I meant to say I can’t spit it out because I had already swallowed the other pills.

“But I didn’t even get that part out before he just yanked me up and threw me down on the ground and was trying to dig these pills out of mouth.

“And there was one [pill] in there and I couldn’t even get it out because he kept shoving his hand in my mouth and squeezing my face and pulling my hair at the same time.”

“They were acting like I wanted to escape from Alcatraz. It was awful,” she said.

She was also charged with resisting arrest after the incident.

Police State USA states that you must submit to their authority completely or suffer the consequences.