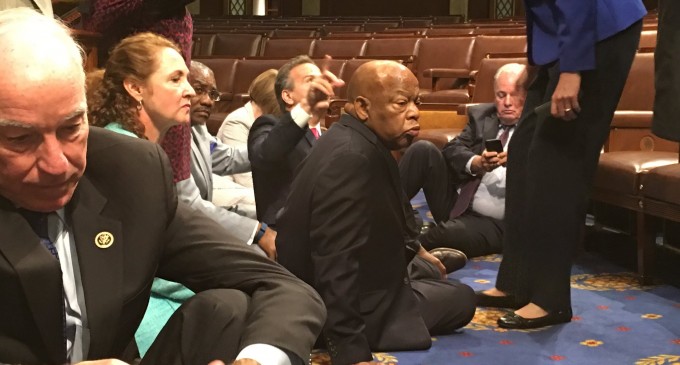 The Democrats are once again following Rahm Emanuel's dictate to not let a good crisis go to waste. The Republicans seem to have gained the upper hand in this most recent debacle, but the Democrats, cynical and looking for attention, are determined to gain ground, and the mainstream media will do everything possible to help support their cause.

As is often the case, the issue was gun control. Which is, of course, just an interim step to gun confiscation. The Democrats are no doubt anxious to take away all citizen guns because there is a grass roots movement that is angry about Democrats attempting to flood the nation with Islamic terrorists and illegal criminals who dilute the economy and take jobs from Americans. The people are also livid that Obama's actions have given rise to Black Lives Matter lawlessness, jammed down our throats Obamacare policies with skyrocketing premiums and impossible deductibles, and forced a host of other illegal and outrageous requirements on the people that are angering everyday Americans and making them wonder what ever happened to the country they loved.

The logical conclusion for Dems is that they must take all the guns from lawful citizens before the second U.S. civil war breaks out and Democrats find themselves becoming uncomfortably familiar with the business end of an AK-47. Typical of Democrats, to make their point they violently took control of the floor of the House of Representatives and demanded to have their way. Republicans are holding for the moment.