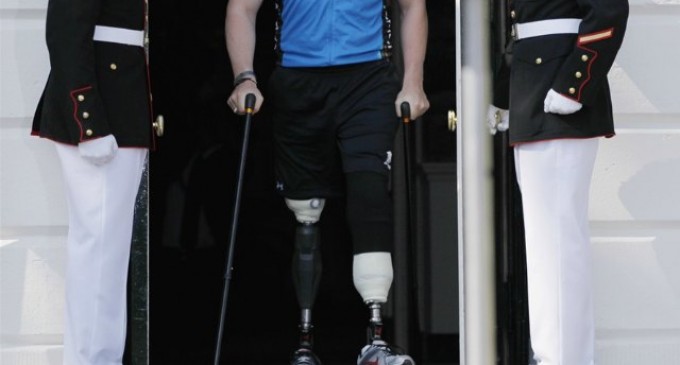 Senate Democrats have killed an amendment from Sen. Kelly Ayotte (R-NH) that would have replaced recent cuts to veterans’ pensions by closing a tax code loophole that allows illegal aliens to access the Refundable Child Tax Credit.

Democrats in Congress are more concern with getting money into the hands of illegal immigrants than getting benefits to our veterans!

Senate Democrats killed an amendment from Sen. Kelly Ayotte (R-NH) that would have paid for unemployment benefits for many Americans and replaced recent cuts to veterans’ pensions by closing a tax code loophole that allows illegal aliens to access the Refundable Child Tax Credit.

The vote failed on Thursday 54-42, with all Republicans but Sen. Dean Heller (R-NV) voting for the amendment and against Senate Majority Leader Sen. Harry Reid (D-NV). Sen. Joe Manchin (D-WV) crossed the aisle to vote alongside Republicans in favor of the amendment.

The amendment would have been to the Unemployment Insurance Extension Bill, S. 1845. On the Senate floor while debating the amendment, Ayotte argued her amendment is “one that would fix fraud in our tax code that really came to light in 2011 in a Treasury IG [Inspector General] report.”

And why is that? Because the investigations of this tax refund that people receive found that they were claiming it for people who were number one not authorized to work in this country were claiming it and secondly for children that might not even exist. Investigations found that children who don’t even live in this country [were getting the tax credit].

Ayotte argued on the Senate floor that her amendment would “pay for three months of unemployment insurance for American workers for this issue that we have before this chamber.”

“It would pay for a fix to the military retirement cuts to the COLA that also impacted our wounded warriors that were done in the most recent budget that were unfair,” Ayotte added. “Members of both sides of the aisle have come together to say we should fix [that] and say it’s unfair. What else would it do? It would reduce the deficit. And what I hear from the Majority Leader is I hear ‘well we’ve heard that idea before.’ Well, we may have heard it before, but we’ve not been allowed a vote on it.”

While Ayotte made a case for the amendment, Democrat Sen. Barbara Boxer (D-CA) argued against it.

“Now this idea of going after children is one of the worst ideas I have ever heard and I’m shocked,” an irate Boxer said on the Senate floor while shaking her finger up and down. “I am shocked. You’re going to hurt children. You’re going to take away food out of their mouths.”

“Let us support our leader,” she said. “And let us work through the weekend to come up with a plan. I think the Majority Leader has one.”

“All they do on that side is complain that their amendments are so important,” Boxer said while throwing both her arms up in the air.