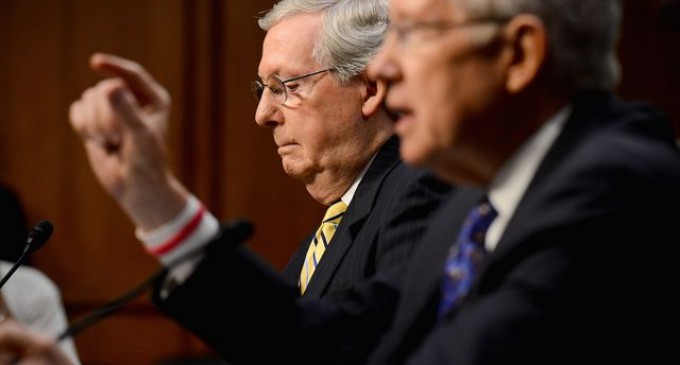 43 Democrats in the Senate have signed onto a bill to effectively repeal the First Amendment. This month a cloture motion was introduced in order to stop debate and move the bill forward.

S.J.Res.19 would effectively give Congress the power to control any political speech in the United States.

Led by Harry Reid, the bill would eliminate the ability of campaigns, political parties and outside groups to spend money in elections. We would all like to see corruption via campaign spending to end, but to eliminate the 1st Amendment is not the way to do it.

Limiting or ending your rights is often initiated under the guise of addressing a problem ‘we all agree on' and this is no different.

“What the amendment [to the Constitution] would do if adopted is give Congress plenary authority, absolute authority, to regulate all political speech,” stated Ted Cruz, who warned us last week this was coming.

Saying the foundations of democracy are threatened, Senate Democrats took the first step Tuesday to rewrite the First Amendment, holding a hearing to rally support for their proposed constitutional change that would give government the power to ban all spending on political campaigns.

The effort drew vows of resistance from Republicans, who harangued Democrats for abandoning free speech rights for political gain. Republican lawmakers said the solution was for Democrats to improve their arguments, not to silence their critics in an assault on fundamental freedoms.

“Where are the liberals today? Why is there not a liberal standing here defending the Bill of Rights and the First Amendment?” Sen. Ted Cruz, Texas Republican, demanded of his Democratic colleagues on the Senate Judiciary Committee.

Forty-three Democrats are sponsoring the amendment, which would give Congress and the states powers to set strict limits — or eliminate — the ability of campaigns, political parties and outside groups to spend money in elections.

Democrats said they were spurred by several recent Supreme Court rulings that have freed up outside groups to spend money advertising for their points of view in elections, leading to a flood of cash, much of it spent anonymously, in the 2012 election.
testify at a Senate Judiciary Committee hearing on “Examining a Constitutional Amendment to Restore Democracy to the American People” focusing on campaign finance on Capitol Hill, Washington, D.C., Tuesday, June 3, 2014. (Andrew Harnik/The Washington Times)

Signaling the stakes in the fight, the Senate’s top Democrat and Republican testified at the hearing, mounting feverish attacks on each other.

“We sit here today with a simple choice: We can keep the status quo and argue all day and all night, weekends, forever about whose billionaires are right, whose billionaires are wrong, or we can work together to change the system, to get this shady money out of our democracy and restore the basic principles of one American, one vote,” Mr. Reid said.

Mr. Reid acknowledged that he felt “so unclean” after his hard-fought 1998 Senate campaign, when one major donor contributed a quarter of a million dollars to the Nevada Democratic Party and let Mr. Reid know he had done so — apparently an effort to curry favor.

“I hope that didn’t corrupt me, but it was corrupting,” Mr. Reid said.

He continued his assault on the conservative Koch brothers, two billionaires who fund conservative causes and who have become special targets for Mr. Reid.

But Senate Minority Leader Mitch McConnell, Kentucky Republican, said Mr. Reid was attacking the Koch brothers as a smoke screen for “how incredibly bad this proposed amendment is.”

He said even liberal lions such as the late Sen. Edward M. Kennedy voted against this kind of effort. Indeed, a 2001 effort to amend the Constitution on campaign finance was defeated by a 56-40 vote, and a 1997 effort was defeated by an even wider 61-39 vote.

Mr. McConnell said Democrats’ push this year is an election strategy, not a serious effort to work through constitutional issues.

“This proposal is never going to pass Congress. This is a political exercise and that’s all it is. The goal here is to stir up one party’s political base so they’ll show up in November,” he said.

The amendment Democrats are pursuing is strikingly broad. If ratified, the amendment would let federal and state governments set limits on how much money could be contributed to campaigns, spent by candidates or raised and spent by outside interest groups such as the National Rifle Association or the Sierra Club.