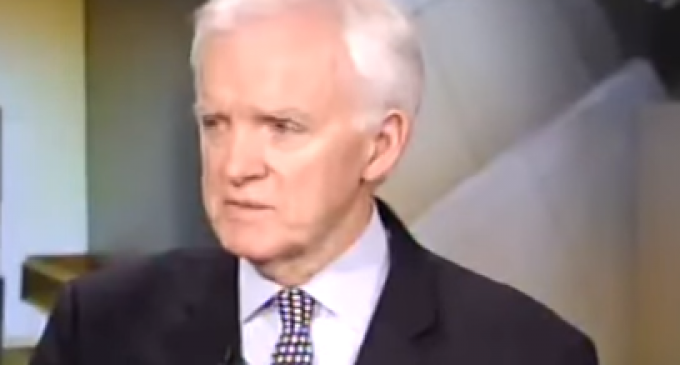 At least one prominent Democrat is fed up with circling around Hillary Clinton's wagon to protect her from scrutiny over her emails.

The narrative pushed by the left and their allies in the mainstream media is that the investigation into her use of her private server to discuss and handle classified information are nothing more than a witch-hunt (no pun intended) by conservatives to derail the former Secretary of State's candidacy. But unfortunately for them, one of their own is no longer parroting the party line.

A former senator and governor, Bob Kerrey has been reliably Democratic during his time in office. In fact, he supported Hillary during her first run for the presidency back in 2007 and is even a member of her 2016 Nebraska Leadership Council. But what he had to say about her handling of the email scandal will make many of his fellow liberals cringe with embarrassment.

Watch video of Governor Kerrey slamming Hillary's conduct on the next page:

As Kerrey made abundantly clear, he is no political partisan out for Hillary's blood. He is simply someone who realizes that her storing sensitive information on her private email server is indefensible and warrants investigation and, if deemed appropriate, punishment:

“Kerrey said, ‘[I]t’s never good to have the FBI in possession of your server, checking out what’s in it, that’s never a good set of circumstances, even if you’re not running for president. If you’re running for president, it’s not good to have it going on. And in this particular case, I do think she’s got a very difficult time explaining why you put a server in your home. And my own view of it is, it’s because you didn’t want to fulfill the requirements of the Administrative Procedure Act, especially the Freedom of Information Act. And we wouldn’t even known about were it not for the Benghazi Committee. So, I’m not a big fan of the Benghazi Committee, but they’re the ones unearthed that she had done this. And it’s — it was a tragic error. You could make a case that FOIA needs to change. You could make a case that the classification system needs to be changed, that both of them interfere with your capacity to do the job, but her response was, I just didn’t want to have two cell phones, which was, I think false on its face.'”

See the videos below: