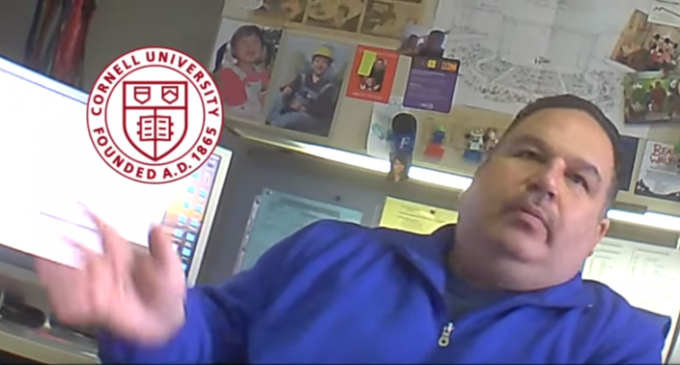 In a undercover sting operation at Cornell University, James O'Keefe of Projects Veritas, poses as a Moroccan student, and engages Dean Scaffido in a question and answer session.  The topic, starting a ISIS club on campus.  With the mass university system a petri dish for liberal progressive thought and causes, the responses to allowing a ISIS club cannot be a surprise.

Yet, it still shocks.

The lengths these educators of the next generation will go to, to indoctrinate the anti-American message to the students is chilling.

Its alarming in a wide view of american culture.  These students are being indoctrinated, and this trend on our universities is not new.  The Obama 2008 campaign tapped into this young group of potential voters, and with success, rode into the White House on the backs of students who have no idea of what America really is, and what she has stood for, since the inception of the US.

Unmasking the professors and administrators of higher education institutions, one find's the infiltration of these progressives are right out of the marxist play book.

Get to the youth.

Tell them their parents and grandparents are out of touch with society.  In grain in them any patriotism, and responsibility to others, any true traditional American value is a lie, and teach them they are entitled to “everything.”

Stress the unfairness to illegal aliens, tell them the poor are a result of capitalistic principles.  Push them as far left as you can.  They will revolt against society, against their parents.  They will be duped to believe those who espouse capitalism are the wealthiest, make slogans up, have them shout against a free market while they enjoy sipping their non-fat lattes, wearing Che t-shirts and live in paid for dorm rooms.  Capitalism afforded them the educations and comforts they enjoy.

Do not teach them correct history.  Romanticize the “struggle”.  Tell them a socialistic world will make everyone “the same”.  Tell them the Middle East conflict is due to western excess and prejudice.  Let them start a ISIS club.  This is how we win the revolution, and complete the transformation.

video of sting next page