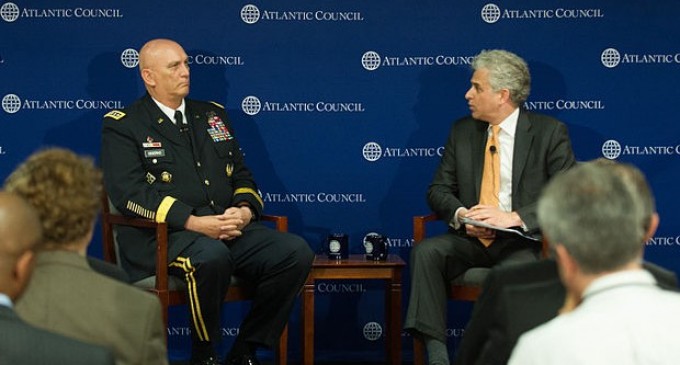 Harlan K. Ullman, senior adviser at the Atlantic Council, a prominent think tank based in Washington DC, has warned that an ‘extraordinary crisis' is needed to preserve the ‘new world order'.

He states that the only threat isn't from terrorists, it's from “non-state actors”, like Edward Snowden and Bradley Manning, who can derail ‘globalization'.

“Failed and failing government from Afghanistan to Zimbabwe with Brussels and Washington in between is the largest collective impediment to the betterment of mankind.

Without an extraordinary crisis, little is likely to be done to reverse or limit the damage imposed by failed or failing governance. The United States is Exhibit A although there are far too many competitors for that title.

Beyond this inflection point in international politics, still unabsorbed and misunderstood by most governments and people, a second reality complicates taking effective action in what could truly be a “new world order…”

There is it, the USA is a ‘failed state' that needs to succumb to ‘globalization'.

With the anniversary of September 11th looming and the tragic killing of U.S. diplomats in Benghazi, Libya, last year still open political wounds in Washington, it was unsurprising that the United States, Britain, and France ordered the closing of a score embassies and posts throughout North Africa and the Middle East and issued travel warnings for the region. In the United States initially, there was general bipartisan support for the closings.

Critics of the Obama administration were quick to point out that the war on terror was far from over and pronouncing the “decimation” of al-Qaida premature. As the word “decimation” was wrongly used yet again — it means a 10 percent degradation — so too has been the collective failure by the West to recognize the tectonic changes that are reshaping the international geostrategic system far beyond the reach of al-Qaida and other terrorist groups.

Hence, the counter-terrorism responses have been technical and tactical rather than strategic and aren't addressing the forces that are dramatically altering the nature of international politics.

In simple terms, al-Qaida is symptomatic of far greater changes in the structure of the international system. The major enemy and adversary are no longer states bent on disrupting or dominating the system despite those who see China as a future foe.

Instead, the more immediate danger rests in the dramatic empowerment of individuals and groups, for good and sadly evil, often lumped together as “non-state actors.”

In essence, the 365 year-old Westphalian system that placed sovereign states as the centerpieces of international politics is being tested and in some cases made obsolete by the empowerment of individuals and non-state actors. As former national security adviser Brent Scowcroft observes, global politics has entered a post-Westphalian era. But very few have taken note and fewer have acted on this realization.

The fundamental cause of this empowerment is the diffusion of all forms of power writ large commonly called “globalization,” accelerated by the information revolution and instantaneous global communications and the real and perceived fragilities and weaknesses of states to intervention, interference and disruption by non-traditional actors.

September 11th could become the demarcation point of this new era much as 1648 and the Treaty of Westphalia marked the beginning of the state-centric system of the international order.

While the analogy is loose, it won't take centuries for the effects of globalization and the end or at least the transition of the Westphalian era to take hold.

Beyond this inflection point in international politics, still unabsorbed and misunderstood by most governments and people, a second reality complicates taking effective action in what could truly be a “new world order,” the description coined by U.S. President George H.W. Bush after the implosion of the Soviet Union more than two decades ago.

Failed and failing government from Afghanistan to Zimbabwe with Brussels and Washington in between is the largest collective impediment to the betterment of mankind.

Without an extraordinary crisis, little is likely to be done to reverse or limit the damage imposed by failed or failing governance. The United States is Exhibit A although there are far too many competitors for that title.

However, the changing Westphalian system can and must be addressed if there is to be any chance of success in containing, reducing and eliminating the dangers posed by newly empowered non-state actors.

We have been here before. Sixty-eight years ago this month, the nuclear age dawned over Hiroshima. Over time as nuclear and especially thermonuclear weapons were seen as more than just extensions of conventional munitions and potentially existential, a theory of deterrence emerged. We are at similar juncture regarding cyber where we lack an overarching understanding of the implications and possible consequences of this domain.

The first step as the Westphalian system faces profound redefinition is understanding and recognizing that these shifts are under way. From that appreciation, specific concepts and ideas can be fashioned to help guide us on this journey.

The path will be difficult and tortuous. Politics and ideological preferences will confuse and distort clear vision. The tendency to overreact, as occurred after September 11th and the Snowden and Manning leaks, will collide with budget realities in which a great deal less will be spent on national security. And because of the pernicious nature of the U.S. system of government, finding institutions with the objectivity, courage and perseverance to chart this new unknown won't be easy.

Yet this must be done.