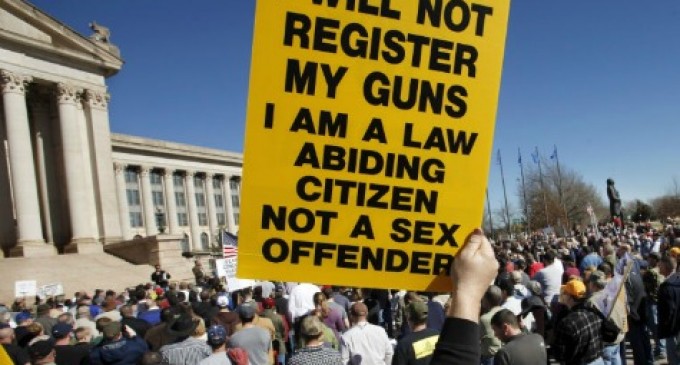 The police state expansion is in full swing as residents in Washington D.C. are made to re-register any gun purchased between 1976 and 2010 or face fines and jail time.

Firearm registration is the first step towards confiscation.

Beginning January 1, all Washington, D.C. gun owners are being required to re-register any guns that were registered “between 1976 and 2010.” According to NBC Washington, this re-registration will take place every three years from this point forward.

Every three years, the Washington Metro Police Department (MPD) will send out forms requiring gun owners to verify that they “still live in the District and… still have your firearm.” The penalties for not complying with re-registration range from “a $13 fee to a $1,000 fine and one year in jail.”

When Senator Joe Manchin (D-WV) pushed universal background checks earlier in the year, Breitbart News warned that the federal government would have to create a gun registry to make Manchin's plan work. The government would have to know where every gun is and who owns it in order to know whether people are submitting to background checks or selling privately.

Similarly, the D.C. universal background check policy has led to a gun registration program for just this purpose.

Dick Heller–the D.C. resident behind the famous District of Columbia v. Heller (2008) case which struck down the handgun ban in the district–says he will sue over this re-registration requirement as well. He said this requirement punishes law abiding gun owners because “you don't see criminals registering guns.”