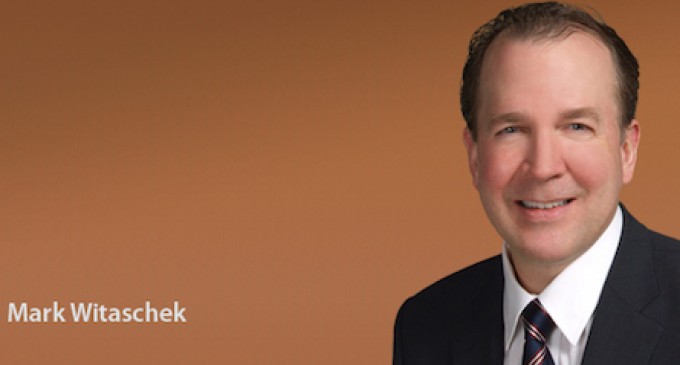 A successful financial adviser with a spotless criminal record is about to go to trial for possessing a single, misfired and inoperable shotgun shell in his own home.

Mark Witaschek is the first known case in Washington, D.C. of a citizen being prosecuted for inoperable ammunition.

Washington police and prosecutors have spent a year and a half, and a lot of taxpayer money, trying to nail him for the possession of ‘unregistered ammunition'.

“Since the night my home was invaded and family terrorized by a militarized D.C. police force, I am more afraid of what government is doing than I am of any of the people I encountered when I spent the night in jail,” Witaschek stated to The Times. “The Second Amendment was meant to guarantee individuals the right to protect themselves against government — as much as against private bad guys and gangs.”

A year ago this month, the attorney general for the District of Columbia let NBC News anchor David Gregory off scot-free for possession of a “high capacity” magazine because doing so “would not promote public safety.”

Now, Irvin Nathan refuses to use that same prosecutorial discretion for an average citizen who violated a bizarre technicality that makes empty casings and shells a crime as serious as having an illegal firearm.

Mr. Witaschek, a successful financial adviser with no criminal history, is the first known case of a citizen being prosecuted in D.C. for inoperable ammunition. Washington police and prosecutors have spent a year and a half trying to nail him for the possession of so-called unregistered ammunition.

A hunter and gun owner, Mr. Witaschek has always kept his firearms at his sister’s house in Virginia. If convicted, he faces a year in jail and a $1,000 fine for having a single, inoperable shotgun shell in his home. The jury trial starts on Feb. 11.

The Metropolitan Police Department raided Mr. Witaschek’s rented Georgetown house twice in the summer of 2012 on the word of his angry ex-wife.

Frustrated with not finding the promised firearms, the police handcuffed him, searched his home top to bottom and came out with only ammunition, which carries the same felony penalty as a firearm.

Mr. Witaschek told me this week, “Since the night my home was invaded and family terrorized by a militarized D.C. police force, I am more afraid of what government is doing than I am of any of the people I encountered when I spent the night in jail.”

He added, “The Second Amendment was meant to guarantee individuals the right to protect themselves against government — as much as against private bad guys and gangs.”

There have been two pre-trail hearings in the case so far. At the end of the first hearing in November, Judge Robert Morin gave the government until Jan. 3 to come up with a good defense for the initial police raid without a search warrant.

Knowing things weren’t going in their favor, the two assistant attorneys general for the District on the case, Peter Saba and Oritsejemine Trouth, offered Mr. Witaschek probation if he pleaded guilty. He declined the offer.

At the second hearing, the judge disallowed the first warrantless search and the fruits of it. This eliminated a box of rifle ammunition from the charges.

Undeterred, the prosecutors continued with the two items from the second raid — a misfired 12-gauge shotgun shell and a box of muzzleloader sabots.

Sabots are plastic covers that make it easier to push the bullet into a muzzleloader gun. There is no propellent on the bullet or sabot — because the gunpowder is separated — so it is not clear that it can be categorized as ammunition and thus only registered gun owners can possess it.

Thus, the single vaguely legitimate remaining charge for “unregistered ammunition” is the misfired shotgun shell that Mr. Witaschek has kept as a souvenir from deer hunting years earlier. The shell cannot be fired because the primer was already stricken and failed to propel it.

“I believe that some in the prosecution and police apparatus know what they did and are trying to continue this charade to cover their tracks,” Mr. Witaschek said of the warrantless raid and SWAT team tactics used against his family. “If I am proven a ‘criminal,’ then their bad acts are covered. If not, they are liable.”

That’s why Mr. Witaschek turned down the prosecution’s second offer that he would plead guilty to a reduced charge of “attempted possession” of ammunition. That crime still would carry a maximum of penalty of a six-month jail sentence, and it is not eligible for a jury trial.

Neither of the prosecutors nor the spokesman for Mr. Nathan responded to requests for comment.

Without a firearm, Mr. Witaschek could not do anything dangerous with an inoperable shotgun shell or muzzleloading bullets.

So it is inconceivable that a judge or jury would see this case as anything other than an overly technical interpretation of a law supposedly intended to prevent crime.