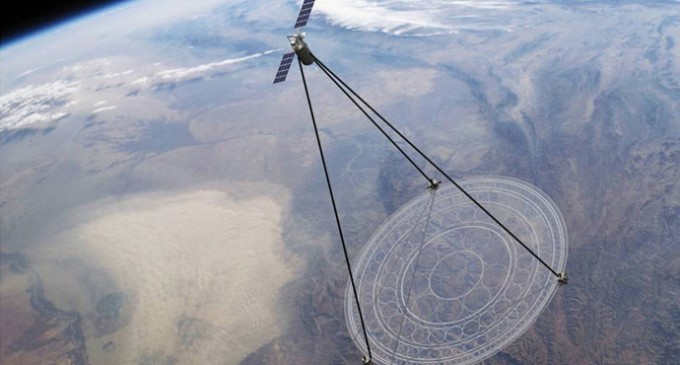 It seems that everyday we hear of some new way our government is expanding its spying upon citizens.

Let's just forget about using technologies – and your tax money – to fight poverty, reform the failed criminal justice system, revive a dying economy or some such thing…surveillance is where it's at!

It's made up of 18 octagonal mirrors that unfurl to form a massive eye, measuring 68 feet (20.7 meters) in diameter, and from a position 35,000 kilometers above the Earth, MOIRE will be able to view around 40 percent of the planet’s surface.

The satellite will transmit what it sees in high resolution and in real time.

The US Department of Defense has designed a next-generation satellite capable of observing 40 percent of the Earth’s surface at any one time. The MOIRE satellite will be able to beam high-resolution images in real time from anywhere on our planet.

The Defense Advanced Research Projects Agency (DARPA) – the institution that comes up with new technologies for the US military – has developed the revolutionary satellite. The Membrane Optical Imager for Real-Time Exploitation (MOIRE) is made up of 18 octagonal mirrors that unfurl to form a massive eye, measuring 68 feet (20.7 meters) in diameter.

From its position 35,000 kilometers above the Earth, MOIRE will be able to view approximately 40 percent of the planet’s surface. The satellite will transmit what it sees in high resolution and in real time.

“It would be optimal to have real-time images and video of any place on earth at any time—a capability that doesn’t currently exist,” writes DARPA on its website. Currently the MOIRE is in the second phase of its development and a ground-based prototype has been successfully tested.

Up until this point, the logistics of transporting such an enormous satellite into space made such a feat impossible. However, MOIRE’s 18 octagonal mirrors are made of a plastic membrane about as thick as cling film instead of heavy glass lenses. As well as being significantly lighter, the new material is also more flexible and can be folded and as a result takes up less space at launch.

“Membrane optics could enable us to fit much larger, higher-resolution telescopes in smaller and lighter packages,” said Lt. Col. Larry Gunn, Darpa program manager, in a statement. “In that respect, we’re ‘breaking the glass ceiling’ that traditional materials impose on optics design.”

Moreover, the membranes are easier to protect than their glass predecessors and are able to survive more wear and tear. Instead of reflecting light like mirrors, the membranes diffract light with specially placed obstacles etched into their surfaces. The membrane focuses the light onto a sensor which then transforms it into an image.

Although DARPA has not released any information on how much it costs to produce the membranes, the new design has the potential to drastically lower the costs of putting a satellite in orbit.