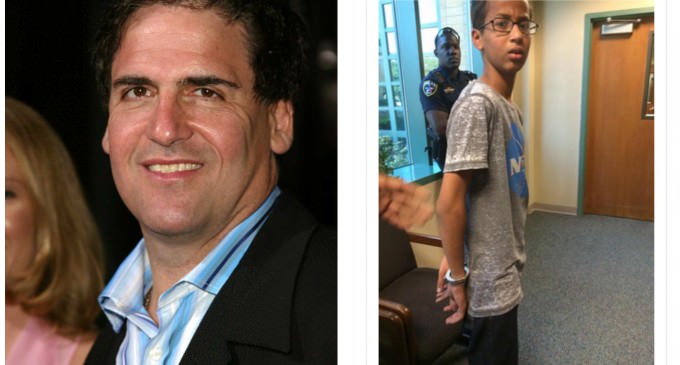 Dallas Mavericks owner Mark Cuban stated that when he talked on the phone Ahmed Mohamed, the clock/bomb boy, he could tell that Ahmed’s sister was “giving him the answer” on Friday’s broadcast of HBO’s “Real Time.”

Cuban said, “I talked to the kid, he’s from Dallas, and I’ve talked to the people in the school district. The kid is super smart kid, science geek. We talked about science, but while I’m talking to him on the phone, as I ask him a question, ‘Tell me what happened,’ because I’m curious, right? His sister, over his shoulder, you could hear, listening to the question, giving him the answer. More of Ahmed’s whispered answers on the next page:

Mark Cuban has a different take on Ahmed:

“So I talked to the people in Irving, Texas, that work with people at MacArthur, the school. And I said, ‘What happened? What did you hear?’ This is, again, secondhand. He said, the kid, Ahmed, took the clock, put it in the first class. Teacher said, ‘Great. Looks great. It looks great.’ Kid picks it up, takes it to the second class. Teacher said, ‘Okay, whatever. It’s great. It’s great.’ Ahmed didn’t really comment, from what I heard. Takes it to the third class, same thing. Then he got to a point, again, secondhand, where one of the teachers, an English teacher, apparently, said, ‘Look, you’ve got to put it in your backpack, because it’s going to make some people nervous, and it’s making me nervous.’ And again, secondhand, he didn’t — he wasn’t responsive to it at all. And so, it took six classes before anything happened.”

Cuban noted Mohamed shouldn’t have been arrested, and that he “came out way ahead” due to the offers he has gotten since, and agreed with Maher that Muslims face worse atrocities in the Muslim world that should get more attention.