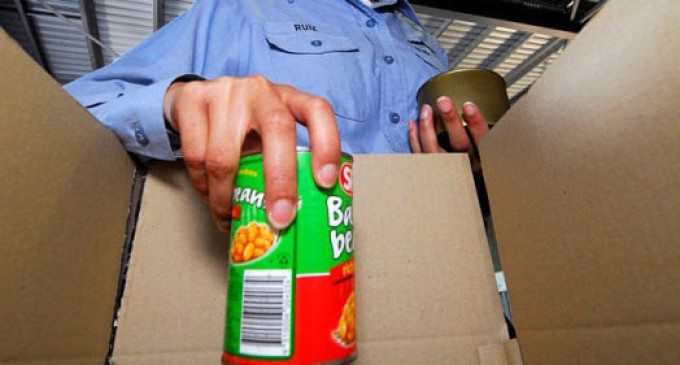 Food banks are now warning that demands on their organizations have grown beyond what they can support, in the wake of the $5 billion funding cut to the food stamp program (Supplemental Nutrition Assistance Program, SNAP). The cuts came into effect November 1st, so the impact will start to be most noticable in the last week of November.

Margaret Purvis, CEO of the largest food bank in America, Food Bank of New York City, told NBC News, “We're telling everyone to make sure that you are prepared for longer lines.”

Purvis also invoked the threat of riots caused by millions of Americans going hungry when she told Salon.com, “If you look across the world, riots always begin typically the same way: when people cannot afford to eat food.”

This has prompted some to speculate that the Department of Homeland Security is gearing up for potential unrest with its recent hiring of security guards to protect government buildings in New York, as well as the purchase of half a million dollars worth of fully automatic pepper spray launchers and projectiles that are designed to be used during riot control situations.

While some form of community food assistance is certainly necessary in most parts of the country, many question whether the government is the best to handle the task, noting that what the government provides, it can threaten to take away. Government hand-outs are an expensive, inefficient and self-perpetuating tactic compared to stimulating employment and the economy. While the concept of food stamps may at first sound noble, creating a climate of job growth will act as a better stimulus than a system that promotes reliance on government systems.