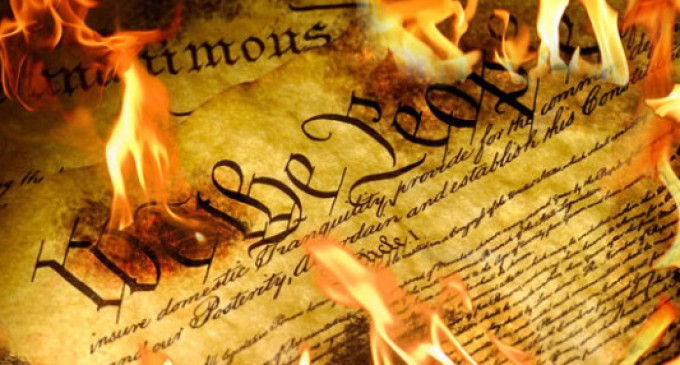 Is Common Core being used as a platform to indoctrinate America’s children to disrespect the Constitution? Reports of one school’s civics lessons indicate children are encouraged to consider the Bill of Rights to be ‘outdated’ and subject to change by a ‘special committee’!

A mother in the Bryant School District in Arkansas — a district using the controversial Common Core curriculum — was surprised to learn her sixth-grade daughter was given a team assignment to revise the Bill of Rights, pruning two amendments from the Constitution while adding two others, Twitchy reported Monday, citing a report at the Digital Journal.

The assignment made the assumption that the United States government has determined that the Bill of Rights “is outdated and may not remain in its current form any longer.”

Twitchy also hoped that one of these “experts” would realize the Constitution isn’t’t amended by a “special committee.”

Lela Spears, the girl’s mother, told the Digital Journal her daughter has not received any training in civics or government.

“After she brought it home and explained her assignment to me, it made me question exactly what she was being taught. Where I can see a class using critical thinking skills to modernize the words, as to help them better understand the Amendments, giving an assignment to remove two then add two with little explanation as to why is upsetting,” she said.

Spears also said her daughter had no clue why she was being tasked with amending the Constitution.

According to the mother, her child was never told how the Constitution is amended, and told the Journal she didn’t believe the word “amended” was ever used in the class.

“I read through the handouts she was given (they do not use a book for this class, nor take one home to study from, only handouts that are put in a box for their table to share and place in their binders), around six in total, and nothing about how an Amendment is ratified,” she said. “I believe that, with the wording of the assignment, many children will think that the Bill of Rights is amended and can be changed by a “special” committee instead of an act of Congress.”

There are two ways the Constitution can be amended. One is for a Constitutional Convention to be called for by two-thirds of the state legislatures. Amendments are then sent to the states to be approved by three-fourths of the legislatures or conventions. This method has never been used.

What do you think of the Common Core curriculum?