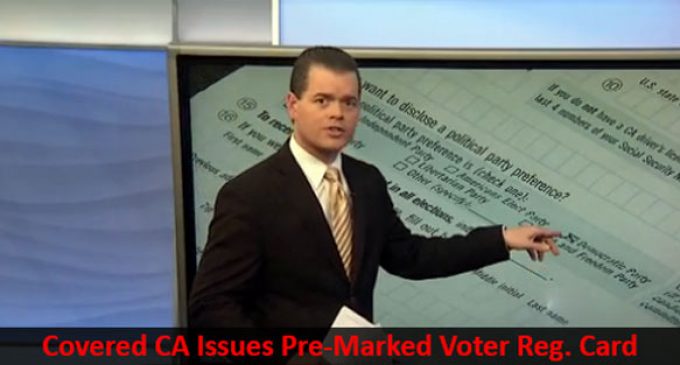 Piling election irregularities on top of unnecessary waste, Covered California sends voter registration cards along with insurance information packages and one couple has reported their card was already pre-marked “Democratic Party”. As 10 News reports, no officials seem able to deal with the problem.

A local couple called 10News concerned after they received an envelope from the state’s Obamacare website, Covered California. Inside was a letter discussing voter registration and a registration card pre-marked with an “x” in the box next to Democratic Party.

The couple – who did not want their identity revealed – received the letter and voter registration card from their health insurance provider Covered California, the state-run agency that implements President Obama’s Affordable Care Act.

They have lived in La Mesa for years and they have always been registered to vote Republican. Now, they are perplexed as to how the voter registration card pre-marked Democrat ended up in their mailbox.

“I’m an old guy and I never would have noticed it, except I have an accountant that notices every dot and dash on a piece of paper as a wife,” said the man who received the mailer.

“It’s a waste of money because there’s an awful lot of people who are going to get this that are already registered and they don’t need to. I can see that, but I can’t see putting x on the form before it’s given to me in a little bitty box that nobody’s really going to notice,” said the recipient of the mailer.