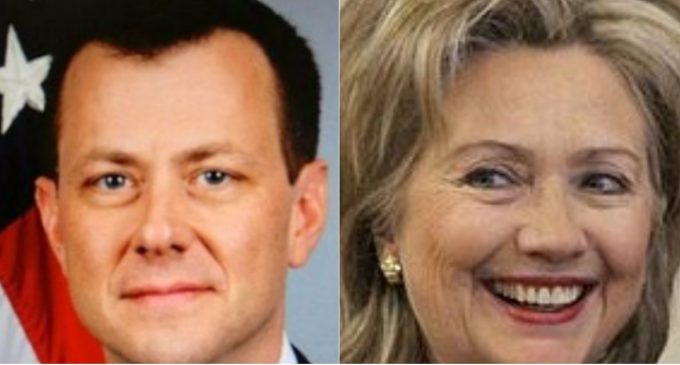 The Deputy Head of Counter-Intelligence, Peter Strzok, who was chosen to for Special Counsel Robert Mueller’s “dream team” of prosecutors and agents who were looking into what was initially the Trump-Russia Collusion investigation, has been outed as a Hillary Clinton shill nearly as embedded into her bloodstream as a Rocky Mountain Spotted tick on the ear of an Australian Shepherd!

Make no mistake:  Mueller’s team of “specialists” are Hillary supports all and make no bones about their outright hatred (not dislike, nor disdain, nor even irksomeness) for Donald Trump.  In the waning moments of the 2016 campaign for the presidency, the agents and personnel who people Mueller’s “dream team” have the ability to make a huge impact on American politics.  Through their blatant super-biases, they have the opportunity to reshape a duly-elected American presidency and erase a legal outcome.  Their motives are transparent to the point of idiocy.  Their super-biases on grand display through words and deeds, regardless of the possible appearance of impropriety or conflict of interest, appears almost an afterthought because of the surety that they will, in fact, get away with their clandestine activities.

Peter Strzok is an individual in the vein of Al Gore.  Unfaithful to their wives, these two men thought themselves to have a higher purpose on Earth.  Al Gore, as we know, has gone the route of Seals & Croft and joined a religious cult, disappearing completely from political life (as it were) to reappear as a guru/steward of Mother Earth.  The religion:  Global Warming.  The mission:  Make billions off of unsuspecting Leftist rubes who buy the failed computer models and Fake News Industrial Complex (FNIC) Public Service Announcements that your carbon footprint may be killing the planet!

Strzok, on the other hand, has joined the Cult of Personality known as Hillary Clinton.  His beef with the American people is not that they voted for Donald Trump so much as they didn’t allow him to thwart the presidency through fast and loose operations at the highest levels of our federal law enforcement agencies.

Read on the next page about how this FBI agent took it upon himself to determine the trajectory of Hillary, the candidate, Hillary, the nominee, and Hillary, the legend, in order to catapult her directly into the seat of the most powerful person on the Earth!