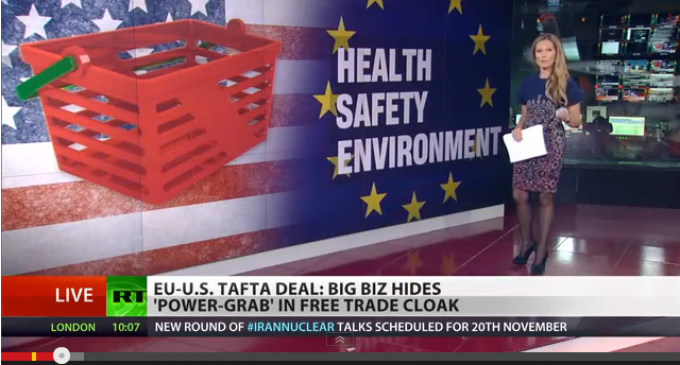 This deal not only removes health, safety and environmental regulations it blatantly places corporate interests above the sovereignty of nations!

Can you imagine a corporation like Monsanto being able to sue a government that won’t allow GMOs in food? This is what is about to possible with this new trade agreement.

Your food will be less save, your environment more polluted and your government will be even more controlled by money-hungry corporations.

At the same time, Obama is quickly sealing the covert Trans-Pacific Partnership deal between the US and Asian countries which essentially does the same thing: end the sovereignty of the United States.

Between destroying our Constitution and creating these trade deals, Obama is without a doubt ending the sovereignty of the United States and placing corporations in charge of our country and our world.

Also, see this story on the Trans-Pacific agreement: http://www.truthandaction.org/trans-pacific-partnership-obamas-secret-trade-agreement-kills-democracy/