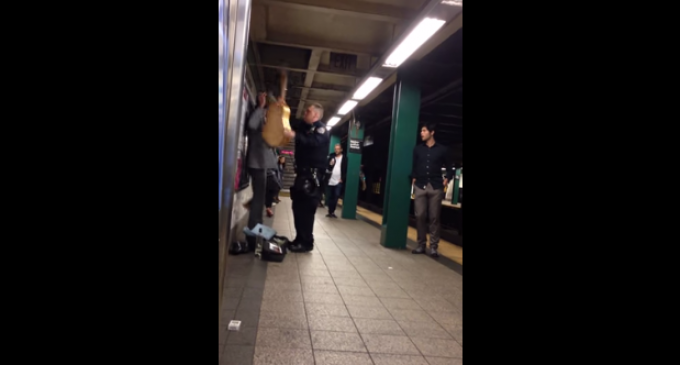 The unlawful arrest of busker Andrew Kalleen, who has been performing in NYC subways for years, has created an outrage online, with his arrest having received over 1,000,000 views on YouTube.

Kalleen was acting completely within the confines of the law to perform at the Lorimer Street-Metropolitan Avenue G-train stop in Williamsburg, but he drew the ire of one cop when he stood up for his rights, who arrested him only for his ‘defiance'.

The cop stated that he needed a permit to perform in the subway systems of New York, which actually isn't true.

The MTA rules reads as follows:

“The following nontransit uses are permitted by the Authority, provided they do not impede transit activities and they are conducted in accordance with these rules: public speaking; campaigning; leafletting or distribution of written noncommercial materials; activities intended to encourage and facilitate voter registration; artistic performances, including the acceptance of donations.”