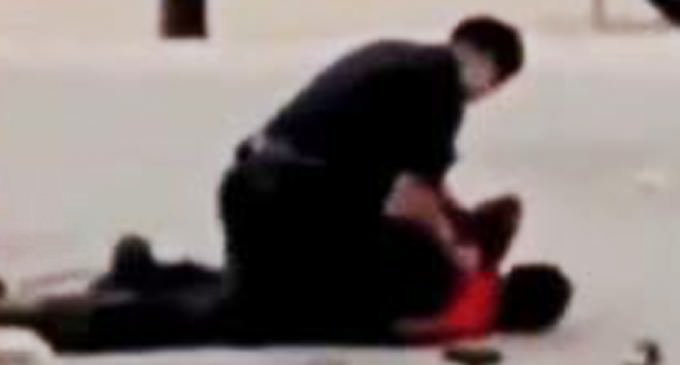 Officer Jesus Martinez was recently fired from the Dallas Police Dept. and charged with official oppression, which is a Class A misdemeanor, for using excessive force against a homeless man.

The cop apparently maced himself and took out his frustration on this panhandler.

For three-and-a-half minutes, Joe Wesson can be heard screaming and groaning in pain in a recording of his arrest.

The video was shot by a passerby who saw Wesson being arrested in June 2014.

You can hear the passerby commenting on the tape, ‘Damn, that is unnecessary.’

Wesson is pictured already handcuffed and not resisting arrest. Officer Jesus Martinez stays on top of him and yanks Wesson’s arm over his head several times.

‘He actually was kneeing me in my back and pulled both my arms in the air like he was trying to break both of them,’ Wesson said.

According to an arrest affidavit, Martinez said Wesson was panhandling, and resisted arrest by swinging at the officer with closed fists and grabbing the officer’s uniform, causing it to rip.

The officer said he had to use pepper spray but that was not captured on video, and Wesson disputes the account.

‘I am 57 years old. I’m not thinking that it’s that serious for a cop to really take that much force on one guy,’ Wesson said.

The officer did radio for assistance, but remained on top of Wesson even after other officers arrived. He eventually left Wesson lying on the concrete.

‘Clearly, we have an issue here in the City of Dallas, and something needs to be addressed,’ said Daryl Kevin Washington, Wesson’s attorney.

Wesson was charged with resisting arrest.

The Dallas Police Department declined comment, saying there are ongoing internal and criminal investigations into the officer’s actions.