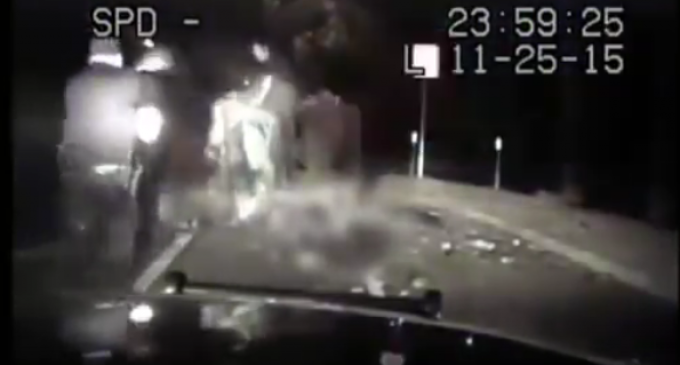 The volatile political climate makes it hard to have a reasonable discussion about law enforcement, but shocking footage captured in California reveals an unambiguous incident of police brutality.

Responding to a car crash, Officer Patrick Feaster pulled up to the scene of the accident and exited his vehicle. The driver of the crashed vehicle, 26 year-old Andrew Thomas, attempted to make his way out of the wrecked SUV when Feaster inexplicably drew his weapon and fired it at him, causing the crash survivor to sink back into the totaled automobile as a bullet penetrated his neck.

Thomas’ wife, Darien Ehorn, was also present when the accident occurred, dying instantly when she was flung through the windshield. Yet Feaster did nothing to aid or otherwise assess Ehorn’s condition, literally passing the body by as he advanced towards the wreckage and shot Thomas.

For video and more information about this disturbing police shooting, turn to the next page: