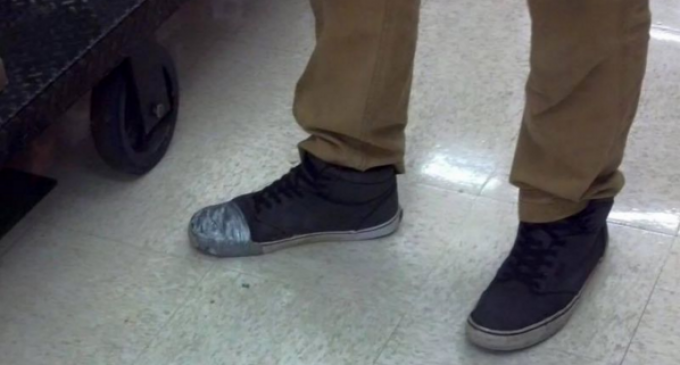 The duct taped tennis shoes caught the eye of Cpl. Sebastian Goldman, an 18 year veteran in Hueytown, Alabama police force, while shopping at the grocery store.  He asked the young man who was wearing the shoes, “What’s up with duct tape? Is that something all the kids are doing? A fashion statement?” as 19-year-old supermarket employee helped Goldman carry the bags of groceries to his car.

The teen told Goldman that he was waiting until payday so he could buy new ones, but until then the duct tape was to hold his broken shoes together so he could keep working.

Before driving off with the food for the jail inmates, he asked the teen what his shoe size was.  Goldman's fatherly instincts were working overtime as he wondered if this young man would have to walk home in broken shoes in the rain.

Later on, Goldman made a stop at a shoe outlet and grabbed a new pair for the 19-year-old and returned to the supermarket.  He surprised the young man with the shoes, saying, “Man, here you go. I didn’t know [if] payday was Friday or two weeks from now.”  The young man asked what he owned him but Goldman just told him to pay it forward.

Continue reading this great story, as too much of the media paints cops as killers and vilifies them like Beyoncé and her Black Lives Matter cohorts did at the Superbowl.